The EMUHSD Board of Trustees honored Brianna and Emilie during the June 16 meeting, celebrating them for their success and dedication to the sport with certificates of recognition and words of appreciation from Arroyo High School’s girls wrestling Coach Can Tran.

“Being nationally ranked hasn’t really changed how I perceive myself, it’s just a number. I know how much work I put in and I believe and have faith in my work ethic,” Emilie said. “I plan on going to a four-year university to continue my academic and athletic career, but I am not quite set on where yet.”

Brianna and Emilie have been wrestling since seventh grade, and plan to continue to compete and hone their skills during their upcoming senior year at Arroyo High School.

“As sisters we push each other to be better on and off the mat,” Brianna said. “Whether that is us communicating with each other on the things that are working for us or the things that we need to improve on. Also, our competitiveness between each other helps us stay ready and wrestle to the best of our ability.”

Both sisters fell in love with wrestling after joining Beat the Streets, a national program that cultivates youth development in underserved communities by encouraging a desire for excellence, respect, teamwork, leadership, integrity, and perseverance through the instruction of quality wrestling programs.

“We are very proud of Emilie and Brianna for their hard work, dedication and amazing accomplishments that will undoubtedly be surpassed in their future endeavors,” Tran said.

“The District is incredibly proud of Brianna and Emilie for displaying excellence both on and off the mat; they are both very well-rounded students who are not only succeeding in wrestling but academically as well,” Superintendent Dr. Edward Zuniga said. “El Monte Union is excited to have both Brianna and Emilie as part of our community and we wish them good luck as they continue to compete and achieve their goals.” 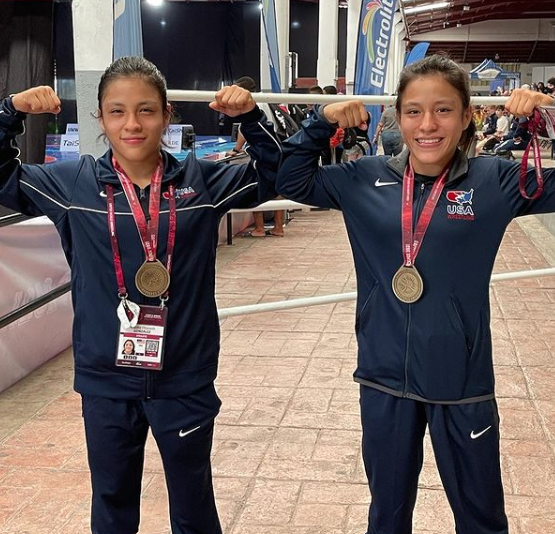