That all three of the race’s winners were girls cemented the primary lesson behind an educational unit conceived by teacher Jose Rangel: Careers in science, technology, engineering, arts and math (STEAM) are not limited to men.

“This unit is about looking at women who have made amazing contributions to STEAM. It’s not just to race cars and win trophies. It’s to learn,” Rangel told 90 fifth-graders gathered March 9 for the final heats in the derby.

A cardboard cutout of Patrick stood near the end of the derby track, which was loaned from Cub Scout Pack 820 Covina, a partner with Walnut in the lesson plan.

The message of equality was clear to the three winners.

“We have the same potential as the boys do in races,” said Ariana, who took first place.

“Girls can’t just be judged by the way they look – they have to be judged by how they do things,” added Andrea, who came in second.

“Girls can do whatever they want. They can do STEAM,” said Leslie, who placed third.

The race is one of two innovative lessons conducted this year by Rangel to highlight gender equality in STEAM fields. In the first, students researched the imbalance of STEAM toys sold by Target aimed at boys and girls and gave TED Talk-style presentations.

Rangel, who has three older boys, said he has been inspired by his fourth child – a daughter – who loves science.
“There’s not a balance in toys,” he said. “Boys are given toys that help with building creativity and critical thinking.”

For this project, Rangel collaborated with Sal Duran, who supports teachers at the school as a curriculum, technology and intervention coach. In each fifth-grade class, students studied the topic and built cars; Rangel’s dual-language class learned the lesson in English and Spanish.

On March 9, the crowd of fifth-graders, surrounded by parents, teachers and District administrators, cheered wildly during the final heats. The track, equipped with electronic sensors, logged the times in each heat, creating a cumulative time for each car.

Ariana’s cat car beat out Andrea’s by less than a 100th of a second.

Her father, Jeff Ramirez, was beaming.

He said Ariana delved deeply into the physics of the car’s construction.

“She kept putting the weights in different places to see what effect they had. She understood the cat would have a little drag, but the weight placement would compensate.”

Ariana said she chose the cat because it looked sassy, even though it could have slowed the car.

“My theme of my car is sassy cat. This cat is feisty,” she said.

Leslie said her car was a last-minute replacement.

“At first, I had smaller car, but since it was small they said it didn’t qualify,” she said.
Walnut School Principal Leslie Peregrina praised Rangel, Duran and Walnut’s other fifth-grade teachers for supporting students as they pursued the lesson plan.

“Lessons like these take our classroom instruction and add a real-world dimension,” Peregrina said. “These students will never forget the effort it took to create these cars, their performance on the track and, most importantly, the message that STEAM fields are within everyone’s reach.”

Fifth-grader Abel Cortez summed it up after the race:

BPUSD_PINEWOOD_3: Four cars cross the finish line in one of the final heats of Walnut Elementary School’s Pinewood Derby. In lane three is the sassy cat car designed by contest winner Ariana Ramirez, edged in this heat by the sleek racecar designed by second-place winner Andrea Salazar. An unpainted car created by third-place winner Leslie Hernandez trails in on lane one. 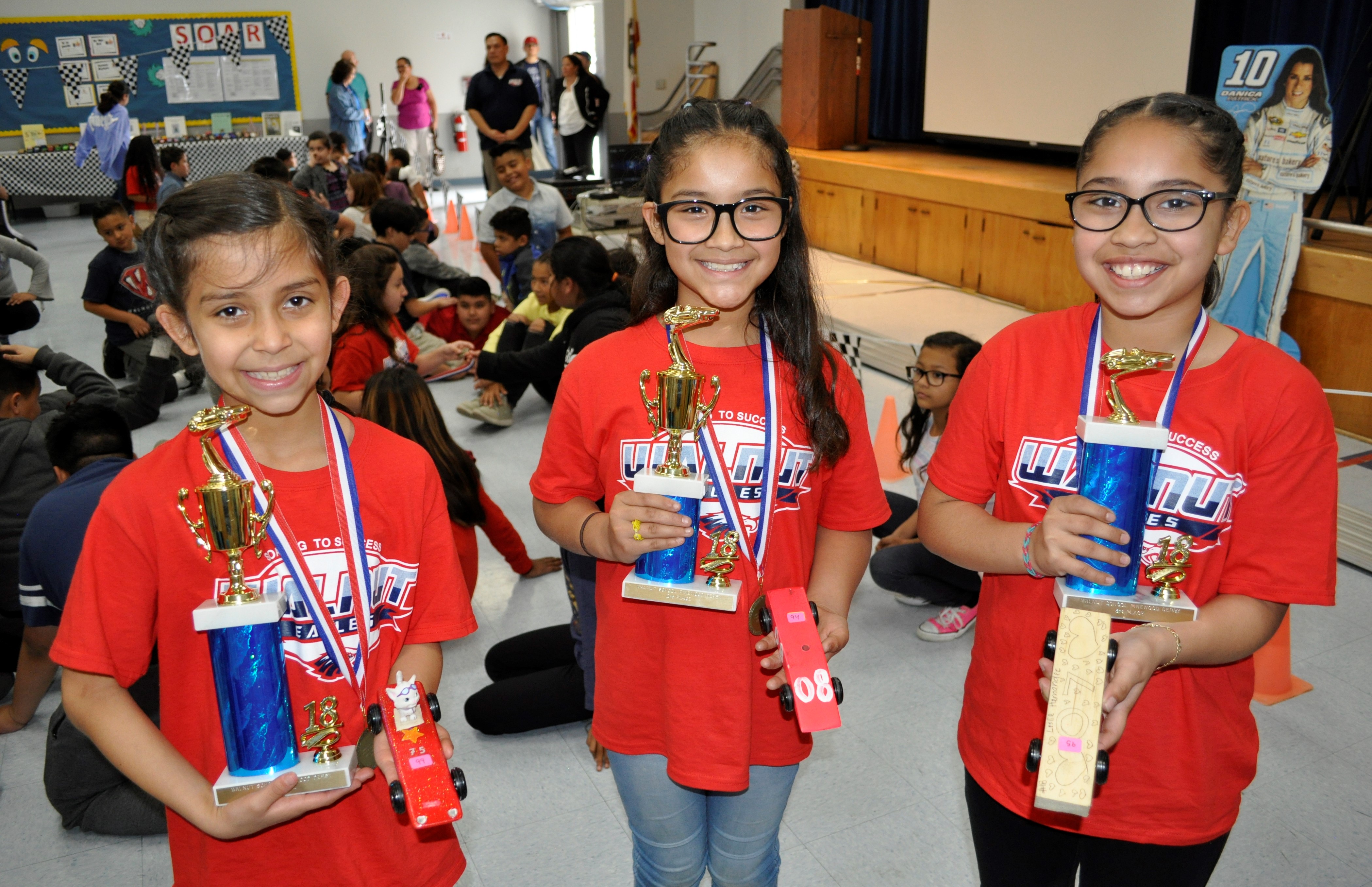 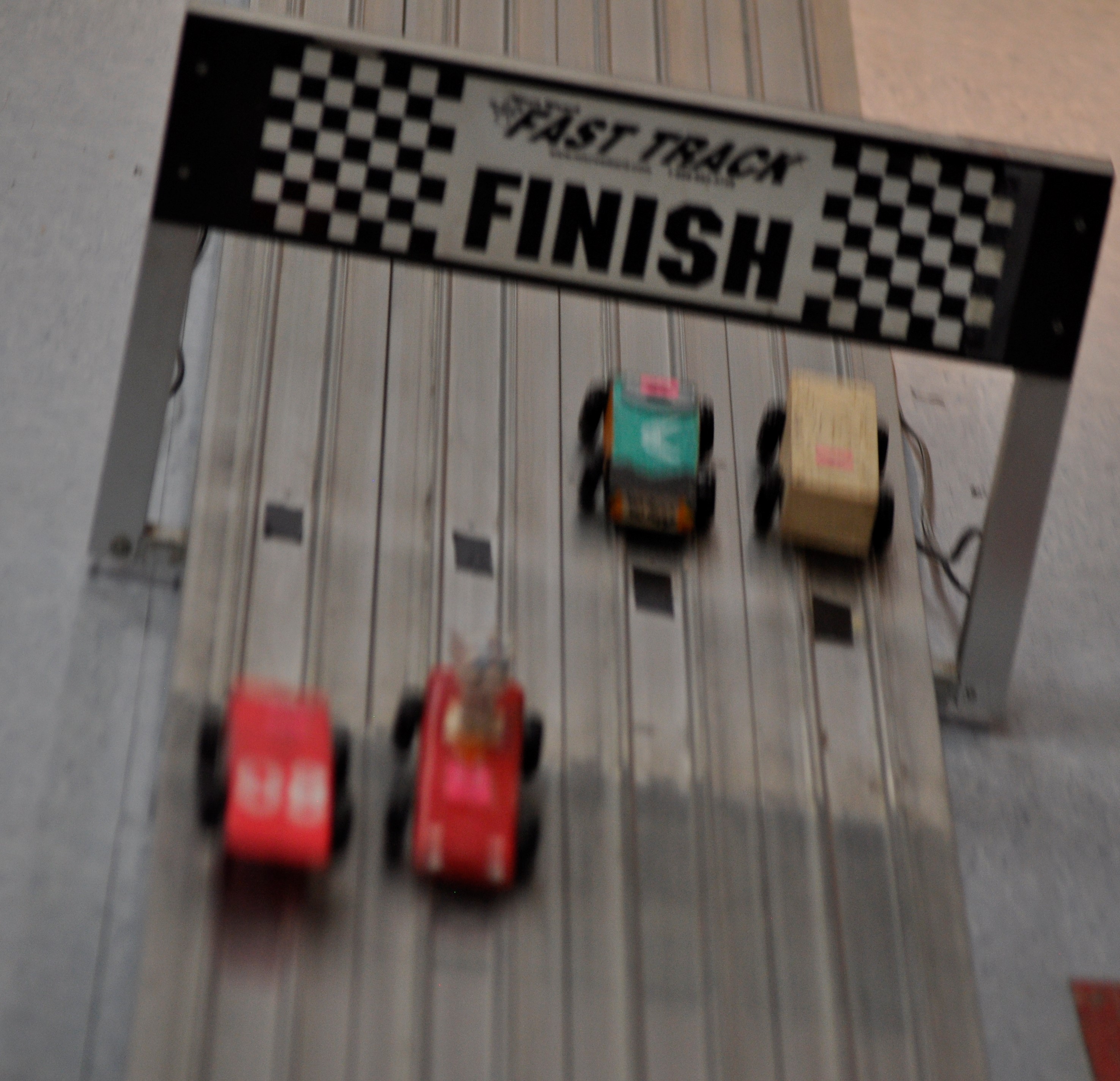 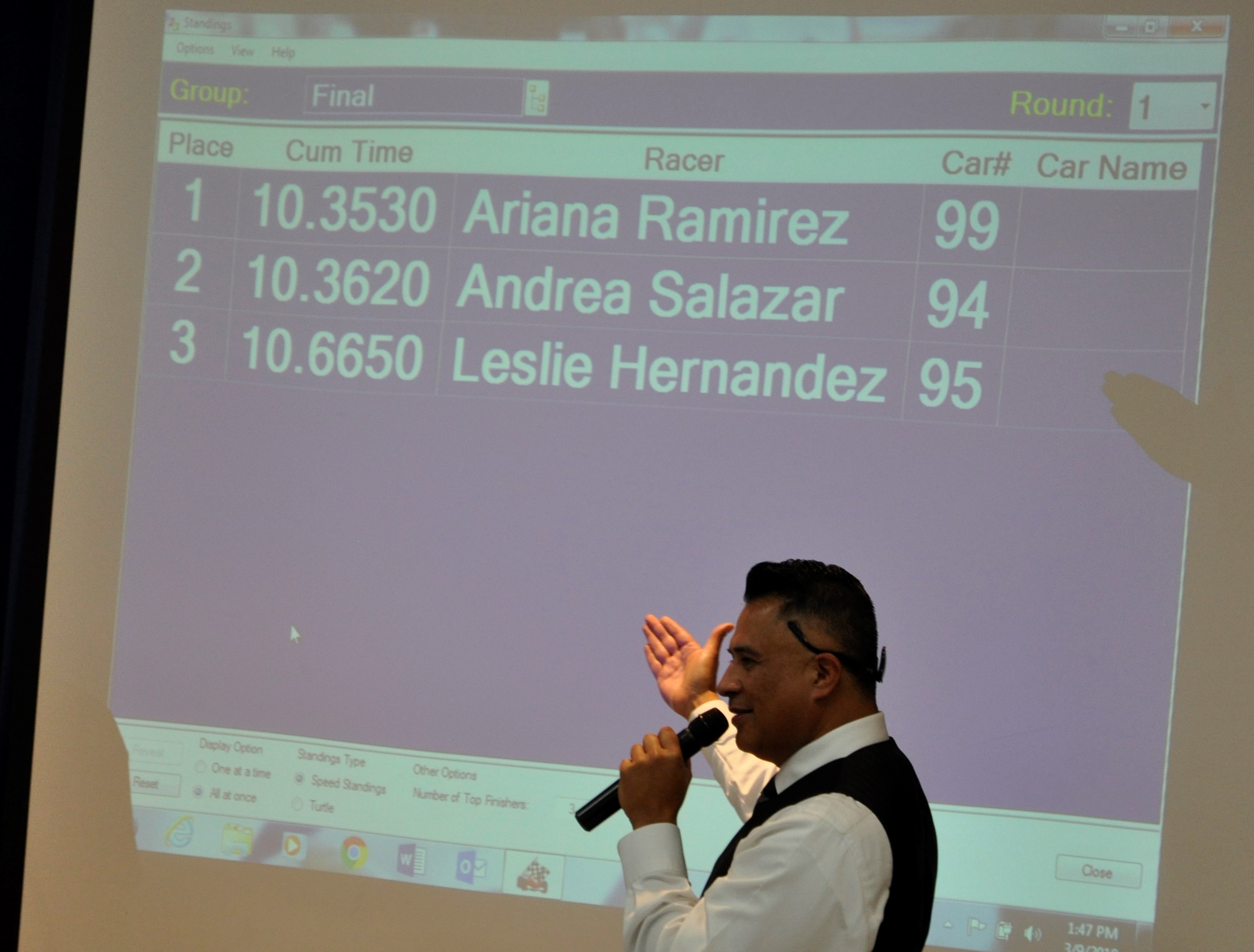