When Isobel Anthony sings, the audience takes notice: the 17-year-old performs with poise, her voice crystalline in timbre and precise in pitch. The Malibu High School junior is preparing for a summer packed with practice and performances after her recent recognition by the Music Center of Los Angeles as a 2015 Grand Prize Finalist at the Spotlight Awards – success she attributes to hard work and the supportive, quality instruction she’s received from teachers in the Santa Monica-Malibu Unified School District. Anthony was one of 14 finalists recognized from 1,600 student applicants representing 450 schools across Southern California for Spotlight, a prestigious competition, scholarship and training program. 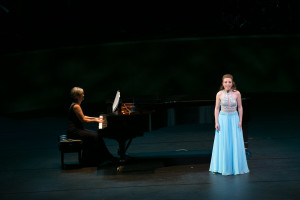 The Santa Monica–Malibu Education Foundation (SMMEF) is getting closer to its fundraising goal of $4 million for the 2015-16 school year. To reach that mark ahead of its June 30 deadline, SMMEF is hosting its second annual Pier Party at Pacific Park on the world-famous Santa Monica Pier. The Sunday, April 26 event, held from 10 a.m. to 2 p.m., is open to Santa Monica-Malibu Unified School District (SMMUSD) families and friends only. It will feature food, rides, games and other entertainment. SMMEF funds innovative education and enrichment programs for SMMUSD students. The Foundation has raised $2 million thus far. For more information, visit www.smmef.org.

Three Team Marine members from Santa Monica High School who were awarded first place at the Los Angeles County Science Fair will compete at the state level on Monday, May 18 and Tuesday, May 19 at the California Science Center. Martin Liu, Kimberly Fuentes and Zoe Parcells placed first in the county fair out of 16 teams in the Environmental Management category for a project examining short- and long-term cigarette accumulation rates for seven major streets over one year. The students – who also ran two beach collections that suggested significant storm drain transportation of cigarette butts from the streets – picked up more than 40,000 cigarettes. They hope to lobby Santa Monica City Hall to enact laws to reduce public smoking and prevent butts from entering the ocean. Photos are available.

More than 300 children and their families attended the ninth annual Noche de Cesar Chavez at Santa Monica-Malibu Unified’s Edison Language Academy on March 20, sharing stories about the school’s annual trip to bring supplies to Mexican orphanages and listening to a second-grade concert celebrating the Mexican-American labor activist’s legacy. The school took a busload of students and their families to spend a day with the children – reading, playing, doing arts and crafts, and sharing a meal. Second-graders worked for six weeks with the school’s choral music teacher to write a song about Chavez, which was featured in the evening’s concert.

Every day, students at John Adams Middle School they take a moment to stop, breathe and practice presence. The sixth- through eighth-graders at the Santa Monica-Malibu Unified school are participating in a Mindfulness Program, which is a part of SMMUSD’s initiative to enhance school climates at all sites. The program, a District pilot, not only seeks to teach students how to be focused, calm and present, but also provides a community building component that affects the whole campus, including teachers and staff. Mindfulness is a practice rooted in techniques like meditation and controlled breathing. The idea is to calm the mind and its tendency to make quick judgments or reactions so that respectful and effective responses emerge. The results are heightened awareness, reduced stress or anxiety and a boost in overall academic performance. 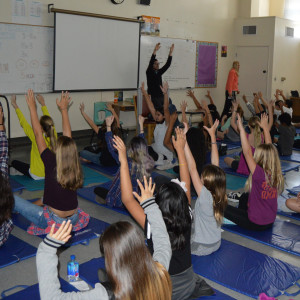 Grant Elementary School students celebrated Pi Day in style, taking third place at the eighth annual Los Angeles County-wide Fourth and Fifth Grade Math Olympiad Tournament, held March 14 in Culver City. It was Grant’s fourth appearance and its first top-three finish, providing a triumphant outcome after weeks of rigorous training. Grant fifth-grader Susan Slavonia also won a third-place individual trophy. Grant was one of four SMMUSD elementary schools – along with Webster, Edison and Muir – to compete against 25 Los Angeles County schools in the Olympiad, an exacting competition where students work independently and as a team in a race to solve complex mathematical problems.