Two Santa Monica High students who have shown remarkable ingenuity in the classroom recently spent two weeks at Purdue University competing for one of four slots on the USA Biology Olympiad team. Samohi sophomore Jordan Docter and junior Rowan Cheung were selected from a field of 10,000 national applicants for one of 20 coveted spots at the National Finals in a bid to represent the country at the International Biology Olympiad at Aarhus Denmark in July. Samohi is the only school in the nation to place more than one student, a testament to the school’s commitment to an innovative STEM program.

Follow-up Story: Students from Santa Monica High School have achieved the perfect trifecta, receiving the top three prizes in the seventh annual Sustainable Santa Monica Student Poster Contest for their artistic expression, creativity and interpretation of this year’s theme “Do More to Use Less.” Advanced Placement Environmental Science students Valerie Young, Yanjun Li and Anastasia Khromova were awarded grand prize, second place and honorable mention for creating posters that addressed the question “How can you raise awareness about the drought and cut back water use by 20 percent?” The Samohi students were recognized at the Sustainability Student Poster Contest Awards Ceremony and Celebration on May 27, hosted at the Annenberg Community Beach House. 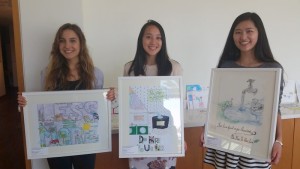 Some 350 seventh-graders at Santa Monica-Malibu Unified’s Lincoln Middle School were interviewed by professionals and community members this week on the theme, “What is a Worthwhile Life?” as a way to prompt the students to reflect on important decisions in their academic and personal futures. In its 24th year at Lincoln, the year-end Worthwhile Life interviews connect students to cross-curricular topics and themes encountered throughout seventh grade. The students were interviewed for 15 minutes on May 21 and 22 by 50 local college professors, Rand researchers, former teachers and students, local business people, and Santa Monica-Malibu Unified administrators and board members, among others. 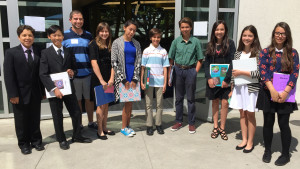 A trio of Santa Monica High School juniors will explore and measure rising sea levels this summer as part of a field study to evaluate how climate change is altering the nation’s coastlines. In Rhode Island, the students will participate in every step of the scientific process, while learning technical skills important to the field of earth science. They will also gain a fresh perspective that will enhance their advancement into higher education. Claire Rawson-Dannenbaum, Brian Stewart and Matias Biraben were selected for L.A. Ignite Fellowships, which are offered by a partnership between the Earthwatch Institute – an international environmental charity that conducts scientific eco-research – and the family-run Durfee Foundation. 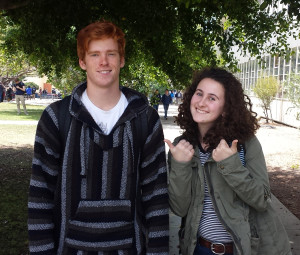 Malibu and Santa Monica High Schools Among Top 150 in State

U.S. News and World Report has ranked Malibu and Santa Monica high schools within the top 150 in California, with rankings of 68 and 147, respectively. The U.S. News rankings stem from college readiness scores – based on demographics, state test scores and Advanced Placement/International Baccalaureate testing. Malibu received a Gold Medal from the magazine; Santa Monica received a Silver Medal. The news comes on the heels of Santa Monica-Malibu Unified’s ranking in the top 10 percent of California school districts by Niche national academic ranking service, which relies on a mix of student and parent feedback, test scores and student achievement data. 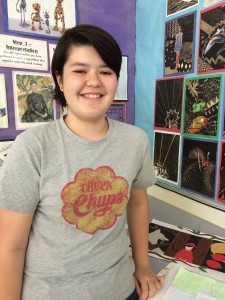 Lincoln Middle School in Santa Monica-Malibu Unified School District was named this week as a California Gold Ribbon School – the state’s highest award for academic excellence. Lincoln was selected for developing an innovative protocol that improves student writing by emphasizing teacher and parent collaboration, improved student feedback and providing targeted one-on-one conferences with students. The awards, which have temporarily replaced the California Distinguished School awards, go to campuses that successfully implement new academic content and performance standards for all students, including English learners, as demonstrated through model programs chosen by the schools. Lincoln was recognized for strategies that sought to close the achievement gap in seventh- and eighth-graders; its goal to ensure that all students have access to the same quality of rigorous, appropriate instruction that increases English fluency; and results in classroom writing scores that are proficient or above. 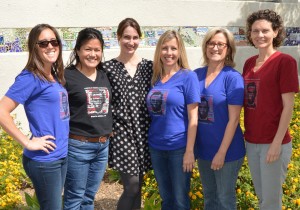 Santa Monica-Malibu Unified has been ranked in the top 10 percent of California school districts by a national academic ranking service that relies heavily on student and parent feedback, test scores and student achievement data, while Santa Monica and Malibu high schools have been named among the top schools in California. In ratings compiled by Niche, an education rating service, both high schools garner stellar scores in educational outcomes, academics, administration, faculty, and health and safety. Niche’s rankings mirror those posted by U.S. News and World Report, which also names Santa Monica-Malibu’s high schools in the top 102 in the state.

The musical documentary BIG VOICE, which follows a year in the life of Santa Monica High School (SaMoHi) Choir Director Jeff Huls and his students, will be screened at SaMoHi’s Barnam Hall at 7 p.m. Thursday, May 7. The documentary shadows Huls and his most advanced ensemble while showcasing Huls’ passion for the choral arts and music literacy. The screening is a fundraiser to help with completion of the musical documentary and gaining final music rights. BIG VOICE was filmed on location at the high school campus. Tickets can be purchased online or at the door. Tickets are $10 for students, $20 for adults and $40 for VIPs. Barnum Hall is at 600 Olympic Blvd., Santa Monica.