With seven schools and a preschool, the San Ysidro School District serves more than 5,230 students. It offers a rigorous and engaging instructional program, with the strong belief that every child deserves a high-quality education that effectively prepares them for life beyond its classrooms. 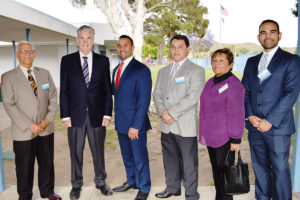 Parents are graduating this week from a nine-week workshop that seeks to educate, empower and inspire parents of K–12 students to take an active role in encouraging and enabling their children to: stay in school; improve their academic performance; develop healthy and constructive relationships with their parents, teachers and counselors; and prepare themselves for a post-secondary education.

Celebrated actor Tony Plana, known for his roles on “Madam Secretary,” “Ugly Betty,” and “¡Three Amigos!,” will attend San Ysidro School District’s upcoming “Beyond the Bell Broadway” musical theater performance, featuring nearly 100 students from six SYSD schools, on Saturday, May 20. “Beyond the Bell” is provided through a partnership with East Los Angeles Classic Theatre (ELACT) company, of which Plana is co-founder and executive artistic director.

San Ysidro School District is seeking at least seven members to serve on its Citizens’ Bond Oversight Committee, which will review expenditures under the District’s $250 million Proposition C bond measure. The District is accepting applications to form the committee, which will consist of parents and guardians of San Ysidro students, local business owners, senior citizen representatives and a member from a taxpayer organization. Members serve two-year terms, reviewing financial reports to ensure bond funding is spent only on school facilities projects. They will report their findings to the Board of Education and to the public.

Follow-up Story: Students at San Ysidro School District’s Smythe Elementary generated $1,121 at their seventh annual “Walk 4 Autism” event on April 6. Proceeds were donated to Autism Speaks, which funds global bioresearch into causes, prevention, treatments and a possible cure for autism, which has become one of the fastest-growing developmental disorders in the U.S.

The San Ysidro School District has adopted a new logo to reflect the district’s modernization and 21st century ideals. The image, which was approved during a March 9 school board meeting, features the silhouette of a student carrying a torch, while the sun rises over mountains in the horizon. The logo will be featured on all district materials by the start of the 2017-18 school year.

San Ysidro School District received 10 new televisions donated by Samsung, allowing teachers to better integrate technology into classroom instruction. La Mirada and Willow Elementary schools will each receive three TVs, while San Ysidro Middle School will receive four. The installations are expected to be completed this month. To qualify for the donation, schools submitted competitive grant applications and demonstrate their need and intentions for the televisions. The donation is part of an agreement between Samsung International Inc. and South County Economic Development Council that aims to offer students more access to cutting-edge educational tools.

San Ysidro School District is transitioning to an online distribution and management system for District and school fliers. By using the PeachJar system, the District hopes to reduce printing costs and improve school-to-parent communication. PeachJar emails fliers directly to parents and posts them on school websites, making the information more accessible. As the District makes the transition, it will continue to provide print fliers at schools and posted on bulletin boards to ensure all families stay informed.