With seven schools and a preschool, the San Ysidro School District serves more than 5,230 students. It offers a rigorous and engaging instructional program, with the strong belief that every child deserves a high-quality education that effectively prepares them for life beyond its classrooms.

The San Ysidro School District is evaluating the configuration of its seven school sites to ensure the District is serving students as effectively as possible. The District has partnered with a K-12 school facility planning consultant to help compile and evaluate data and recommend ways SYSD can optimize instructional programs, school sites and resources. The District is also examining the feasibility of a K-12 charter school that would allow students the option of continuing their education in San Ysidro after middle school. Recommendations will be made to the school board in April 2016.

The San Ysidro School District Board of Education has unanimously approved a collective bargaining agreement with the California School Employees Association, recognizing the commitment and skills of the District's 154 classified staff members and further demonstrating the improving financial health of the District. The agreement mirrors a recent pact with the San Ysidro Education Association. It boosts classified staff salary schedule amounts by an average of 6 percent retroactively to July 1. The agreement runs through June 30.

San Ysidro Middle School is honoring the academic achievement of 189 students at a formal honor roll ceremony, which will recognize students who earn a 3.0-3.49 GPA (Vice Principal Honor Roll) or 3.5-4.0 GPA (Principal Honor Roll) on Friday, Oct. 16. The event will include a drawing for free prizes, including goodie bags, vouchers for “free dress (non-uniform)” passes and snacks. The ceremony will be held at San Ysidro Middle School, 4345 Otay Mesa Road, San Ysidro. 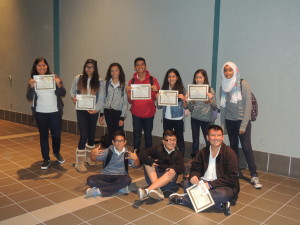 San Ysidro School District has created a communications survey to help determine how to most effectively provide information to its parent community. Paper copies will be mailed to San Ysidro households by Tuesday, Oct. 13 with an online version available the same day.

Follow-up Story: The San Ysidro School District Board of Education in September recognized the dedication and talents of its nearly 200 teachers by unanimously approving an average increase of 6 percent to salary schedules for the 2015-16 academic year, effective July 1. The raise is the teachers’ second since 2007.

San Ysidro School District will launch an after-school performing arts program on Monday, Oct. 12 at four elementary schools and a middle school following an Oct. 1 visit to the District by the program’s founder, Hollywood actor Tony Plana. The program, called Language in Play, applies theater arts techniques to improve literacy and math skills and enhance self-confidence in children. The program will be offered at La Mirada, Ocean View, Sunset and Willow elementary schools and San Ysidro Middle School. Plana, known for his role as Ignacio Suarez on the ABC series “Ugly Betty,” developed Language in Play in partnership with the East Los Angeles Classic Theatre. 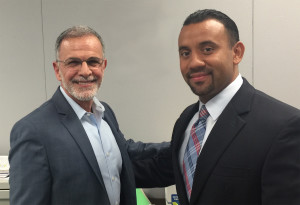