Pomona Unified School District operates 20 elementary schools, five K-8 schools, five middle schools, eight high schools and five other schools. The district was formed in 1954 as a merger of districts dating back to 1871.

A group of seniors enrolled in Pomona Unified’s Village Academy Information Technology program are filming a documentary that captures the creative process and technical production of Cal Poly’s Rose Float, which will debut in the 2016 Tournament of Roses Parade on Friday, Jan. 1. Under the mentorship and guidance of Emmy Award-winning television producer Joetta Di Bella, students are gaining hands-on experience in videography, editing, writing, sound and interview skills, and are following all aspects of pre-production, building and completion of the float, themed “Sweet Shenanigans.” Rallying behind the group have been Cal Poly Pomona and Cal Poly San Luis Obispo representatives, Tournament of Roses officials and television pros who have covered the parade during annual broadcasts. The final film will debut at the District’s annual “PINDIE” Pomona Independent Student Film Festival in 2016.

While there has been an action taken by Los Angeles Unified School District leaders to close schools out of an abundance of caution based on a threat made specifically to LAUSD schools, the following school districts are in session and are urging parents to send their students to school to maintain instructional continuity: Azusa Unified; Baldwin Park Unified; Bassett Unified; Bellflower Unified; Little Lake City; Lynwood Unified; Montebello Unified; Norwalk-La Mirada Unified; Pomona Unified; Santa Monica-Malibu Unified; Whittier Union High. As always, student safety is the first priority and all standard safety measures will be employed by school personnel.

The Pomona Unified Family Support and Resource Center is hosting its fourth annual Elves’ Workshop for approximately 150 homeless and underprivileged families from 9 a.m. to noon Saturday, Dec. 12, providing students with the opportunity to “shop” for presents, giving parents the chance to win prizes and welcoming Santa Claus for photos. The Family Support and Resource Center supports PUSD students and families with a variety of services and referrals that address mental health, health care and housing, among other needs. It will be held at the Village at Indian Hill, 1460 E. Holt Ave., Entrance No. 4, Pomona.

Pomona Unified’s Pantera Elementary School will host two community tours of its successful English/Mandarin Dual Language Immersion Program, which will begin its second year of kindergarten classes in the 2016-17 school year. Parents and community members are invited to see the program in action during tours taking place from 8:30 to 9:30 a.m. and 10:30 to 11:30 a.m. Wednesday, Dec. 9 at Pantera Elementary School, 801 Pantera Drive, Diamond Bar. Tours will be conducted by Mandarin kindergarten and first-grade teachers, allowing attendees to learn of the benefits of the program and observe an instructional segment.

Follow-up Story: Pomona Unified's Special Education Department led local speech therapists in exploring strategies for helping students with communication challenges during a recent conference PUSD co-hosted with a non-profit organization. Speech and language pathologists from Pomona Unified and neighboring cities and school districts convened Nov. 5 at the Village at Indian Hill Conference Center for the “Differential Diagnosis and Treatment of Childhood Apraxia of Speech” workshop, sponsored by the California Speech-Language-Hearing Association District 7. The program featured Dr. Edythe Strand, an international expert in apraxia of speech, a motor speech condition that significantly affects a child’s ability to produce sounds, syllables and words, hindering their ability to communicate and learn.

The Pomona Valley division of the California Retired Teachers Association has provided nearly $750 in mini-grants to Pomona Unified teachers to purchase a variety of classroom materials, from chemistry handbooks and circuit boards for robotics to computer tablets and balance scales. During the highly competitive grant process – in which a seven-member committee from Pomona Valley Division 13 reviewed 256 applications submitted by teachers from 10 school districts – six PUSD educators were selected to receive the small grants to enrich their classrooms and benefit students.

Follow-up Story: Claudie Minor – a 1969 Garey High School graduate and former Denver Broncos offensive tackle who played in Super Bowl XII – celebrated his alma mater’s contribution to Super Bowl history by presenting the Vikings with a Golden Football at their last football game of the season on Nov. 6. As part of the presentation, Garey was inducted into the NFL’s Super Bowl High School Honor Roll. The program is part of a Super Bowl 50 outreach initiative in which schools receive a commemorative Wilson Golden Football for each Super Bowl player or head coach who graduated from their school. 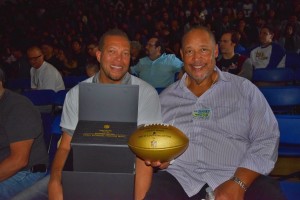 From Monday, Nov. 2 through 4 p.m. Friday, Dec. 18, Pomona Unified families can take advantage of the District’s Open Enrollment program, which provides parents with the opportunity to choose a school that best fits the needs and interests of their child, as well as explore the District’s award-winning programs and high-quality instructional curriculum. Students who reside within the boundaries of Pomona Unified may apply for enrollment at any Pomona Unified School.Applications are available at pusd.org.

Follow-up Story: Simons Middle School celebrated the grand opening of its new Parent Center, providing Pomona Unified parents with the opportunity to network, build strong relationships and have a hand in the success of their children. The Oct. 21 opening drew dozens of parents and District staff, who will be on hand to ensure parents are receiving resources to support their children’s educational pursuits and achievements. About 60 percent of Pomona Unified schools have parent centers. In September, the District opened a model Parent Center at the District Office, where parents are trained to be leaders who promote District-wide initiatives and academic programs that bolster student success. Pomona Unified is also one of about 20 school districts in the state to implement the School Smarts Parent Engagement Program. 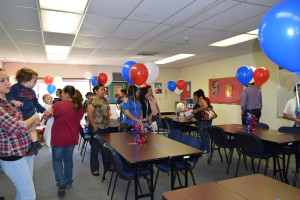 Pomona Unified School District and Cal Poly Pomona were recognized at the White House on Oct. 15 for crafting a partnership to help underrepresented Latino youths get into college. Cal Poly’s program, dubbed Pomona TRANSFERmation, grew out of the state university’s PolyTransfer program, which was created in response to a call for greater access to higher education from the White House Initiative on Educational Excellence for Hispanics. Through the partnership, TRANSFERmation will create pathways for PUSD graduates to enter two- and four-year colleges and universities, as well as improve their college readiness in English and math, build support networks and engage parents. This is the second time Superintendent Richard Martinez has been recognized by the White House for strengthening student achievement.