Follow-up Story: Norwalk-La Mirada Unified Project Lead The Way (PLTW) coordinator Kelly Garcia was recognized as one of the top educators across the country as PLTW Teacher of the Year for middle school students. Garcia leads training workshops for educators across the state and creates science, technology, engineering and mathematics (STEM) events to encourage girls to become interested in STEM careers. Photos are available. 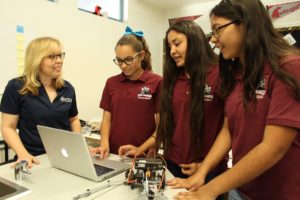 Follow-up Story: More than 100 Norwalk-La Mirada High School students dressed up in professional attire as they participated in the second annual mock interview on Feb. 22. Students prepared for the mock interview since January, including writing resumes and practicing potential questions prior to sitting in front of professionals from Cerritos College, NLMUSD and the City of Norwalk.

Follow-up Story: Below blue, white and yellow balloons, 16 La Mirada High School student-athletes signed their letters of intent on National Signing Day Feb. 1, making official the colleges and universities they will attend in the fall on athletic scholarships. Students will attend universities and colleges across the country, including University of Pennsylvania, Hawaii Pacific and Cal State Sacramento. Photos are available.

Follow-up Story: Olympic gold medalist and La Mirada High graduate Jennie Finch teamed up with a cadre of Olympians and elite sluggers to coach and inspire 120 softball student athletes on Jan. 21-22 to dream and believe at La Mirada High School. Finch and her coaches conducted workshops on pitching, catching, fielding, hitting and fitness training. Finch posed for pictures with her Olympic medals, gave a pitching demonstration and spoke to campers about the sacrifices she made to be a world-class athlete. Photos are available. 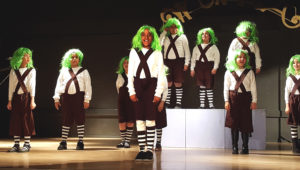 La Mirada High School Sophomore Ryan Vargas has been racing across the country since he was 11, and has tied for national championships in the Bandolero division in 2014, set five track records in Nevada, California and Arizona, and earned Rookie of the Year in 2015 at The Bullring at Las Vegas Motor Speedway. In 2016, he competed in 27 races, placing 12 times in the top five and 25 times in the top 10, along with reaching fifth place in the California state standings. Most recently, he was awarded the Wendell Scott Trailblazer Award by NASCAR, which recognizes a high-performing minority or female driver contributing on and off the track in the NASCAR Whelen All-American Series. Photos are available.

Follow-up Story: Sleigh bells were jingling at the NLMUSD District Office over holiday break, as dozens of families in need were invited to take part in the eighth annual Toy Shop gift giveaway and breakfast on Dec. 22. More than 175 families were treated to a full-service breakfast and had their choice of 580 new toys to give as holiday presents for their children. A District holiday tradition since 2009, the Toy Shop is organized by the NLMUSD McKinney-Vento Homeless Education Program.

New River Elementary School classrooms are equipped with audio enhancement systems that ensure student and teacher voices are projected at an even volume throughout the room no matter where they are seated. Each room is equipped with two wireless microphones – one for the teacher and one for the student speaking – and a small speaker is set in front of the classroom to distribute the sound.