Los Nietos School District is California’s oldest school district, serving an area of 3.5 square miles in Whittier with three K-6 elementary schools and one middle school with grades seven and eight. Vision. The District values building the community through education to ensure students are prepared academically and socially for future success.

More than 300 Ada S. Nelson Elementary students splashed through a mud obstacle course on Sept. 16 during the school’s second annual Mud Run, a fundraising event that helped generate $6,600 for the Ada Nelson Parent Teacher Organization (PTO). The races were staged at Nelson where students navigated through tires, overhanging nets and inflatable slides that sent them cascading into a pool of mud. A new wrinkle added this year allowed parents to run alongside their kids, and all registration fees were donated to the school’s PTO, which helped put on the run. 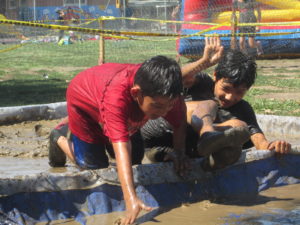 Follow-up Story: Ada S. Nelson Elementary School celebrated a newly erected flagpole and playground with a dedication ceremony on Sept. 22. A ribbon-cutting featured Principal Marla Duncan and Los Nietos Superintendent Jonathan Vasquez. The school’s 400-plus students were on hand for a performance of “The Star-Spangled Banner” and the reciting of the Pledge of Allegiance. The project was funded by the $13 million Measure N bond. Recreational enhancements feature new basketball and volleyball courts, backstops on the baseball field and foam padding and structural updates to the jungle gym. Other campus improvements include a refurbished cafeteria and new asphalt along the walkways. Photos are available.

Follow-up Story: Los Nietos teachers and staff gathered on Sept. 7 for their latest training in the Safe and Civil Schools Positive Behavior Support (PBS) system. The District is in the second of its three-year commitment to train all schools in the program, which uses effective solutions to improve behavior. Los Nietos will undertake four trainings this year and anticipates enhancing safety, reducing discipline referrals and improving engagement. Photos are available. 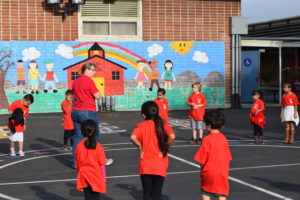 Follow-up Story: Rancho Santa Gertrudes Elementary School celebrated the community with a Special Grandparent's Day lunch on Sept. 9. All grandparents of students were invited to enjoy lunch with their grandchildren on campus. As the oldest district in the state of California, Los Nietos enjoys a rich history of local families and the lunch celebration brought together generations of Los Nietos students. Photos are available. 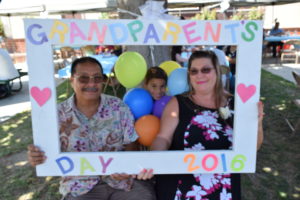 Students of Rancho Santa Gertrudes Elementary School received a surprise visit from a cow and a calf on Sept. 1 as a part of the Mobile Dairy Classroom, a program that teaches kids about agriculture and healthy food choices. Students watched in amazement as an instructor milked the dairy cow and explained its anatomy before allowing the kids to pet the calf. The program is led by the Dairy Council of California, which provides free educational demonstrations across the state throughout the school year. Photos are available.

Los Nietos School District this week will conclude its program of student blood pressure and body mass index screenings as a part of its fourth annual Healthy Los Nietos Program, a partnership with PIH Health aimed at reducing childhood obesity. Screenings will be conducted from 8 to 10:30 a.m. Friday, Sept. 16 at Rancho Santa Gertrudes Elementary School. Screenings were conducted over the last two weeks at Los Nietos Middle School and Aeolian and Nelson elementary schools.

Follow-up Story: Los Nietos Middle School celebrated the new school year with Back to School Night on Aug. 18, giving families a glimpse into the life of students. The event kicked off with a welcome barbecue and information fair on the campus front lawn and culminated with classroom visits led by teachers. Los Nietos Middle School is enjoying several technological upgrades this year. Eighth-graders are receiving Google Chromebooks they will keep at school, while seventh-graders will have access to laptops, iPads and computer labs. Photos are available.

Los Nietos Science Teacher a Candidate for L.A. County Teacher of the Year

Desiree Chavez, a 17-year Los Nietos Middle School science and math teacher, is a candidate to be named one of 16 Los Angeles County Teachers of the Year because of her ability to connect with eighth-graders, whether the topic is algebra or Pokémon Go. Chavez was named Los Nietos Teacher of the Year in May, securing her an invite to September’s Los Angeles County Teachers of the Year Banquet and a nomination for the county TOY honor. Photos are available.

About 1,700 students in the Los Nietos School District will walk into classrooms with new wireless technology and science, technology, engineering and mathematics (STEM) courses when they return to campuses on Tuesday, Aug. 9 because of wireless connectivity upgrades completed during the summer. Every classroom in the District last year received a 65-inch TV monitor, complete with an Apple TV and wireless connectivity that has been upgraded over the summer. At Los Nietos Middle School, every eighth-grader will receive a Google Chromebook to use at school and seventh-graders will get access to laptops, iPads and computer labs. The use of this technology in the classroom is possible because of the upgraded wireless infrastructure installed over the summer. The upgrades are among projects funded by the $13 million Measure N Bond that was approved by Los Nietos voters in November 2014. In addition to the tools, Los Nietos Middle School has split a highly popular year-long computer science class introduced in 2015-16 into two semester classes so more students can learn to design webpages and build video games.