Bellflower Unified has invited community members to review the District's 2015-16 School Accountability Report Cards (SARC), a comprehensive summary of the performance and conditions of each of our public schools. The report cards, made public Feb. 1, are available for review at local schools, electronically on local school websites and on the state Department of Education website. The reports provide an overview of each school and details about staffing, curriculum programs, student performance on state standardized tests, materials, quality of facilities and per pupil spending.

Katherine Shaw, a kindergarten teacher at Bellflower Unified’s Washington Elementary School, was surprised with a $25,000 Milken Educators Award during a March 3 ceremony led by Milken Foundation President Lowell Milken and California Superintendent of Public Instruction Tom Torlakson. Shaw, who was stunned by the announcement, was praised for sculpting her teaching approach to student needs. She also helps guide fellow teachers. The Milken Award, dubbed the Oscars of Teaching, will go to up to 35 teachers across the U.S. in 2017. Shaw is one of two in California to receive the award and the first Bellflower Unified teacher to be honored. For more information, go to www.milkeneducatorawards.org. Photos are available. 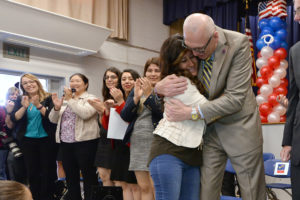 Bellflower Unified’s Thomas Jefferson Elementary will hold its second annual Bingo for Books event from 5:30 to 7:30 p.m. Wednesday, March 1, with families moving from room to room across the Dr. Seuss-emblazoned campus playing bingo and winning books. During the event's first year, more than 325 students and their families won over 500 books. Bingo for Books is organized by the Thomas Jefferson Elementary PTA, Associated Student Body and Family Night Committee, with support from staff members who decorate the campus. The books given out are donated by the PTA, staff members and other members of the community. Jefferson Elementary is at 10027 Rose St., Bellflower.

Bellflower Unified’s popular Spanish dual-immersion program – launched several years ago at the Intensive Learning Center – will expand to Washington Elementary School in 2017-18, creating a convenient option for families living in the north end of the District. A preschool dual-immersion program was launched at Washington Elementary this year. Kindergarten and preschool registration for both sites opens Monday, March 6. 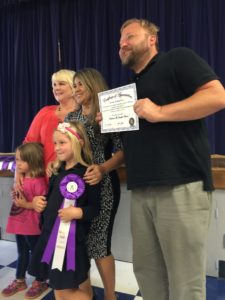 Fifth-graders from Bellflower Unified’s Stephen Foster Elementary will don historical attire from 9:15 to 10:15 a.m. Tuesday, Feb. 28 for the final presentation of a “wax museum” that visitors bring to life by donating coins. Once activated, the students give a speech on their historical figure, Benjamin Franklin, Sitting Bull, Harriet Tubman and Susan B. Anthony. Students also made presentations on Feb. 21 and 24. More than 200 students and parents visit the museum each day, donating coins for Pennies for Patients and a science assembly. Foster is at 5223 E. Bigelow St., Lakewood. Photos are available. 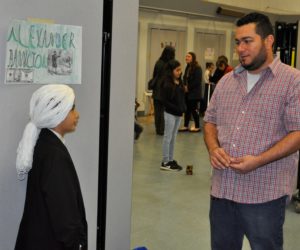 Bellflower Unified’s highly innovative Las Flores Home Education Independent Study Academy has earned a three-year initial accreditation from the Western Association of Schools and Colleges (WASC). The TK-10 school, which offers a blend of homeschool support and core curriculum, was praised by a WASC visiting committee for effective and caring leadership, parent engagement, strong use of technology and an emphasis on hands-on, student learning. School officials, who announced the decision Feb. 8, are expanding the school's high school offerings one grade each year. Each expansion will require a new review.

About 20 students with special needs from Bellflower Unified’s Mayfair High School, along with general education schools, took part in a Special Olympics Unified Sports basketball game during halftime at the Feb. 3 Mayfair/Artesia matchup. Participants were members of Mayfair's LAFF (Learning Acceptance through Friends and Fun) Club, which creates connections between students in the special and general education programs. Photos are available.