Bellflower Unified Seeks Applications for Board of Education Seat

Bellflower Unified is seeking applicants to fill a Board of Education seat being vacated by Dr. Paul Helzer, who announced his retirement after serving 15 years on the board. The appointee will serve until the November 2018 election. Applications are available from 8 a.m. to 4:30 p.m. starting Monday, July 24 at the Superintendent’s Office, 16703 S. Clark Ave., Bellflower. They are due by 4:30 p.m. Monday, Aug. 14.

Follow-up Story: Bellflower Unified School District will receive more than $536,000 to buy two electric school buses and charging stations under a South Coast Air Quality Management District (AQMD) program that will strengthen the District’s already environmentally friendly bus fleet. The District is one of 16 districts and two charter schools to share $8.8 million allotted for 33 buses and charging stations. Bellflower Unified runs a fleet of 28 buses, including 26 powered by compressed natural gas (CNG). The new vehicles are expected to be in service in spring 2018. 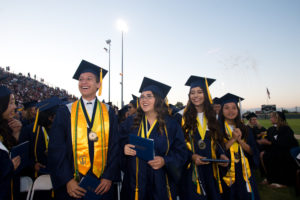 Follow-up Story: Bellflower High School co-valedictorian Yvette Valtierra encouraged her Class of 2017 classmates on June 14 to use lessons learned at school and their ongoing pursuit of education to bring social change and make a positive impact on their community and the environment. Valtierra shared her remarks during a commencement ceremony recognizing 358 graduating seniors – all clad in dark red gowns with golden embellishments – who accepted long-anticipated diplomas in front of more than 4,000 families, friends and educators. The ceremony began with fireworks erupting in the sky as representatives of the U.S. Marine Corps presented the American flag and a Bellflower High School ensemble group performed the National Anthem. An atmosphere of celebration and togetherness was highlighted with the ensemble’s acapella rendition of “Lean on Me,” which had graduating seniors swaying, clapping along and embracing through the smiles and tears. 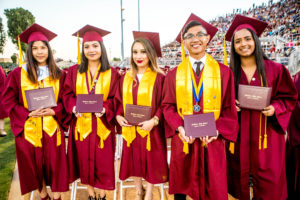 Follow-up Story: Bellflower High School honored 136 members of its Class of 2017 with academic honors, recognition of athletic prowess and service efforts during a Senior Awards Night held June 6 at the high school. Thirteen students were recognized for achieving highest honors, 32 for high honors and 64 for honors, indicating GPAs of 4.0 and above, 3.5 to 3.99, and 3.0 to 3.49, respectively. In addition, 32 students earned state Seals of Biliteracy, indicating fluency in at least two languages, and 59 students earned Golden Merit Seal Diplomas, signifying mastery of at least six subjects. Three students completed dual-enrollment programs at Cerritos College for students interested in teaching careers, 14 students are being honored with lifetime memberships in the National Honor Society and 19 with lifetime memberships in the California Scholarship Federation. Nine students were honored as Young Black Scholars. Students also received school awards from specific departments as well as honors for service and athletics. 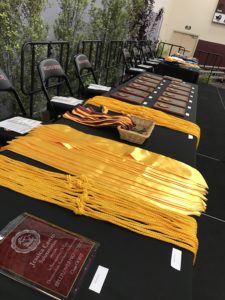 Some 230 students in preschool through third grade are earning Pathway to Biliteracy Awards this week for their 2016-17 academic progress as part of Bellflower Unified School District’s growing dual-language immersion program. The students collected ribbons at a series of celebrations after demonstrating development of language and academic skills in English and Spanish. Ceremonies were held June 12-14 for 31 students in preschool, 67 students in kindergarten, 45 students in first grade, 45 students in second grade and 42 students in third grade. More than 350 family members and school leaders have attended the events, with children called one by one to receive ribbons; their families were invited to take photos with children and school representatives. 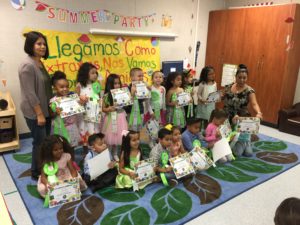 Follow-up Story: Alexis Nelson, a graduate of Bellflower Unified’s Somerset Continuation High School, speaking to her classmates at the school’s June 13 commencement, vowed to use her education to save future generations of disadvantaged children from the perils of inner city life. Nelson told 600 family members and friends who gathered for the ceremony at Bellflower High’s Ron Yary Stadium that her effort to give back to her community and finding a solution to gang violence starts when she attends Cerritos College to study criminal justice, with plans to become probation officer. Somerset High’s seniors will attend a variety of institutions, including Cerritos College, Long Beach City College and Universal Technical Institute. Some 21 of the graduating seniors received scholarships totaling more than $5,000 from community groups and academic associations. Audience members showed their pride in graduates by wearing customized T-shirts featuring student names and faces, and live-streaming the ceremony. 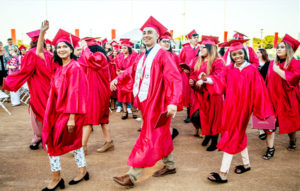 Bellflower Unified Celebrates Graduations for 964 in Class of 2017

Follow-up Story:  Bellflower Unified celebrated graduations for 964 seniors in the Class of 2017 from Bellflower High, Mayfair High and Somerset Continuation High School on June 13-15. Somerset – a California Model Continuation High School – held its ceremony first, congratulating 120 graduates for overcoming adversity as they pursued their degrees. Bellflower celebrated 358 red-and-gold clad graduates on Tuesday at a ceremony attended by more than 1,000 family members, friends and educators. Mayfair celebrated its 486 graduates on Thursday. All ceremonies were held at Bellflower’s Ron Yary Stadium. Photos are available

Follow-up Story: Mayfair High School honored 228 seniors from its Class of 2017 with awards that included honors, high honors, highest honors, participation in the Mayfair Academic Program, the Golden State Deal Diploma and the Seal of Bilteracy during the school’s annual Senior Awards Night. The event, held June 7, featured the awarding of $46,000 in scholarships as well as department and Mayfair Distinguished Awards.

Bellflower Unified will host a special informational meeting from 6 to 7 p.m. Monday, May 22 for families interested in enrolling their children in the District's expanding Las Flores Home Education Independent Study Academy. The independent studies high school features a blended-learning program for grades nine through 11 and a traditional support program for grades nine through 12. The academy is at 10039 E. Palm St., Bellflower. For information, contact Principal Tami Zylla, 562-804-6565 or visit lasfloreseducationalcenter.org.