WHITTIER – Close to 500 local middle and high school students who completed a challenging six-week summer math academy inspired by famous educator Jaime Escalante celebrated the milestone during a ceremony with friends and family on July 14 at Pioneer High School.

Each student was recognized with certificates for successfully completing the 26th annual Escalante Summer Math Academy. Individual classes also posed in front of bleachers filled with smartphone-toting family members. The seventh- through 12th-grade students who received A’s or Bs have earned 10 credits that will be transferred to their transcripts, enabling them to advance one course level.

“Students from all five high schools and all six middle schools came together at the Escalante Academy for a common purpose, which is to excel together,” said Javier Gonzalez, math department chair and director of the summer academy. “The sacrifice they’ve made this summer is not in vain even if they didn’t pass because they’ll be prepared for the school year.”

Held in June and July, Pioneer’s math academy, named after the renowned math educator who died in 2010, offered classes in Algebra I, Algebra II, Geometry and Math Analysis and one calculus workshop to students from Whittier Union’s five comprehensive high schools and a few local private schools. Seventh- and eighth-graders were able to take Algebra I.

The program compresses a math class that is normally taught over an entire school year into 150 hours.

“In the end, it’s going to help my future and career,” said Diego Zorrilla, a rising senior at Pioneer High who wants to major in international business management and expects that he’ll have a better shot at getting into a top college after going through the summer math academy. “I know that if I do this class I’m going to be able to push ahead and be on top of my peers.”

The 1988 film “Stand and Deliver” made Escalante famous by depicting his career teaching math to struggling students at James A. Garfield High School in East Los Angeles. Gonzalez was mentored by Escalante while both taught at East Los Angeles College (ELAC), where a separate Jaime Escalante Math Program exists.

Gonzalez developed the math academy at Pioneer to give students a jumpstart in mathematics and inspire them to take college-level classes while in high school. ELAC sponsored 10 classes and Pioneer High sponsored five classes. Local math teachers, 13 college students and 40 advanced high school students tutored students at this year’s academy.

“I see math like a life problem,” said Jennifer Siciliano, a rising senior at Pioneer High who completed the academy’s calculus class. “There are 99 ways to go into a math problem, but there’s only one solution.”

“The Escalante Summer Math Academy has been a tremendous asset to Pioneer High School and is a great example of the rigorous enrichment programs we are able to offer our students and others who are on their way to high school,” Pioneer Principal Lilia Bozigian said. “The math skills our students learn over the summer are crucial to their pursuit of careers in science, technology and engineering and we are proud of its growth.”

MATHACADEMY: Whittier Union students pose with their certificates after graduating from the Escalante Summer Math Academy’s Calculus class and tutoring younger students over the summer break at Pioneer High School during a recognition ceremony on July 14. 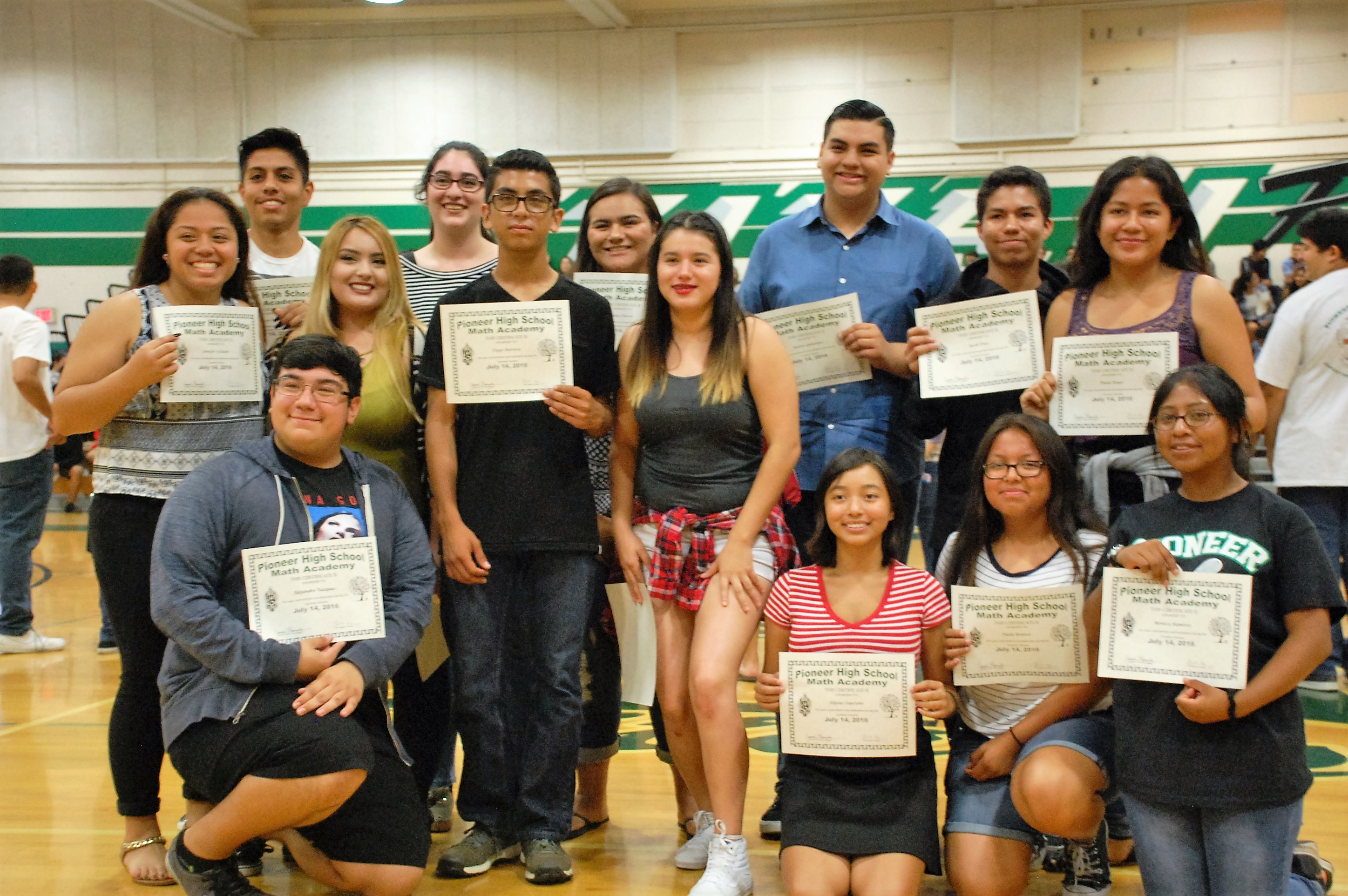