WHITTIER – Elizabeth Israelian is set to take the stage at the end of her senior year as one of three La Serna High School valedictorians, a feat she attributes to growing up as the daughter of immigrants who dreamed of pursuing educational opportunities that were unattainable in their native countries.

Israelian’s parents Linda and Hratch came to the United States from opposite corners of the world — Linda from Indonesia and Hratch from Armenia — together providing the nurturing foundation on which their two children would thrive.

“Hearing their stories and knowing how hard it was for them to grow up in different countries motivates me,” said Israelian, 17. “They have always wanted me and my brother to have every educational opportunity possible and are so excited for me to go to college.”

Israelian — who has already received early acceptance offers from Cornell University, USC and UC Berkeley — received an Award of Merit from the Whittier Union High School District Board of Trustees for her dedication to learning.

“Elizabeth exemplifies what it takes to go above and beyond in order to set herself up for a rewarding future,” Principal Ann Fitzgerald said. “She amazes us every day with her unprecedented drive to accomplish whatever she sets her mind to – inside and outside the classroom. Her dedication to her work sets an example for her peers and shows them the potential within themselves to achieve something great.”

In addition to her academic successes, Israelian serves her peers as an Academic Mentor, LINK Crew leader and Summer Bridge mentor. Outside of school, she is the head altar server at her church and volunteers at PIH Health. Her involvement in the 32nd District Young Senators Leadership Program, which provides an opportunity for students to learn about government and legislative processes, has enhanced her desire to pursue a career in public service.

While close to both of her parents, Israelian considers her father to be one of her personal heroes.

“He taught me history, art, literature and philosophy at an early age,” Israelian said. “We would draw together, I would read books to him and he would tell me stories about his life. He played a very significant role in my education and passion for learning and has instilled in me many of the traits integral to my personality today.”

This includes her passion for the arts: She plays the piano and violin, enjoys composing music and has served as the second violin section leader of the Whittier Area Youth Orchestra.

Israelian hopes to study biochemistry and attain a career in scientific research or as a physician.

“It makes me feel so proud to be a Lancer and have so much support from the staff, teachers and the talented students,” Israelian said. “La Serna supports students to grow academically and personally and to strive for success. Without this environment, I wouldn’t have been able to stand here today.”

ISRAELIAN: La Serna High School senior Elizabeth Israelian, joined by Principal Ann Fitzgerald, is the recipient of an Award of Merit from the Whittier Union High School District Board of Trustees for her unprecedented academic achievements, which she accomplished by drawing from her background as a first-generation American daughter of immigrants. 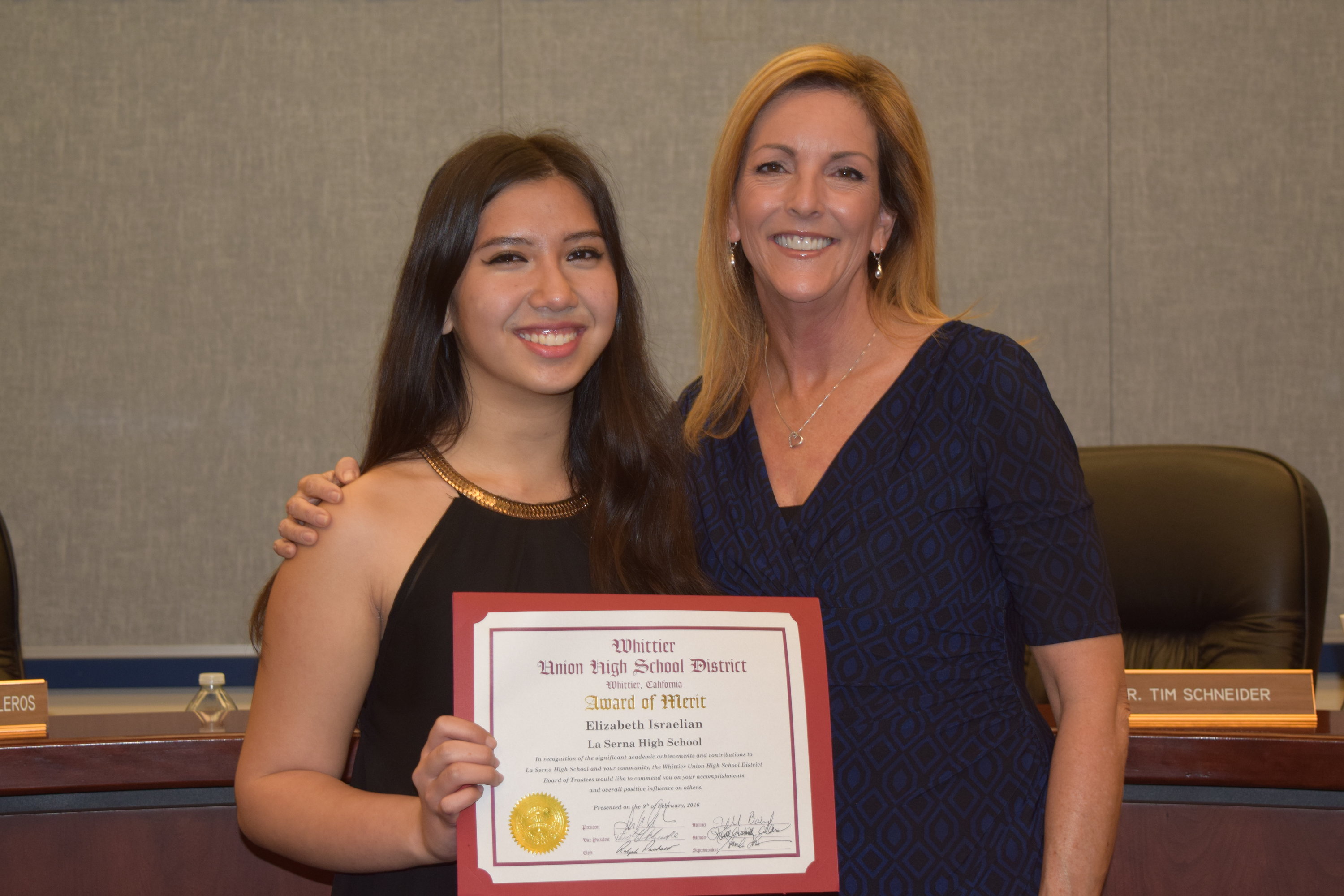