WHITTIER – Just moments ahead of the start of Pioneer High School’s annual Veterans Day Ceremony on Nov. 9, a student walked toward Korean War veteran Frank Canales and his wife, who donned a yellow ribbon, to embrace the hero and thank him for his service and sacrifices.

Canales, affectionately known as Grandpa around campus, recently retired from his post as a 16-year school security staff member at Pioneer; he has attended the school’s student-run veterans ceremony for 17 years and tells his personal story in history classes at Pioneer every year.

“This event means a lot to me because I’m a true American – I love my country and I fought for these students to have liberty and to be in school without fear,” said 85-year-old Canales, a Whittier High School football player who enlisted in the Army’s 40th Infantry Division at 17 years old. “I’m glad I served in Korea because I got to meet people from different cultures and military divisions, and knowing them made me a better man.”

Canales was among four staff members recognized at the school’s annual ceremony, where past and current military members reminisced and shared their gratitude for the lasting friendships they made.

“I love seeing the school come together with our honored veterans because they cannot be forgotten, whether they are part of the fallen or not, and we should acknowledge them in our community for their sacrifices,” Pioneer sophomore Kacie Rodriguez said.

The ceremony featured remarks from Associated Student Body (ASB) students, who gave short biographies on seven alumni who were killed in action and are memorialized on two school monuments. After a performance of patriotic selections by the school band and choir, Canales and the other honored staff members lit Pioneer’s iconic Titan Torch.

Near the campus quad sits the newer monument that was donated by a Titan football parent booster. Names of the same alumni killed are inscribed on the memorial, which also includes the name of former student Salvador Guerrero, Jr., who was killed in Iraq in 2006.

“We can never fully repay our debt of gratitude to those who died in battle or were wounded; however, we can thank and remember the veterans living today,” Principal Lilia Bozigian said. “Today it is our privilege to say thank you to America’s veterans and that we appreciate their service and honor their sacrifices.”

111617_WUHSD_VETERANS1: Pioneer High School staff members and veterans lit the Titan Torch as part of the school’s annual Veterans Day Ceremony on Nov. 9. During the event, four staff members and current military members were honored for their service with patriotic performances by the school’s choir and band.

111617_WUHSD_VETERANS2: Pioneer High School Principal Lilia Bozigian gives a heartfelt speech, thanking the veterans and alumni for their service and sacrifices for their community and country. Students from the Associated Student Body (ASB) delivered short biographies on the seven Pioneer alumni killed in action during the Vietnam and Iraq wars. 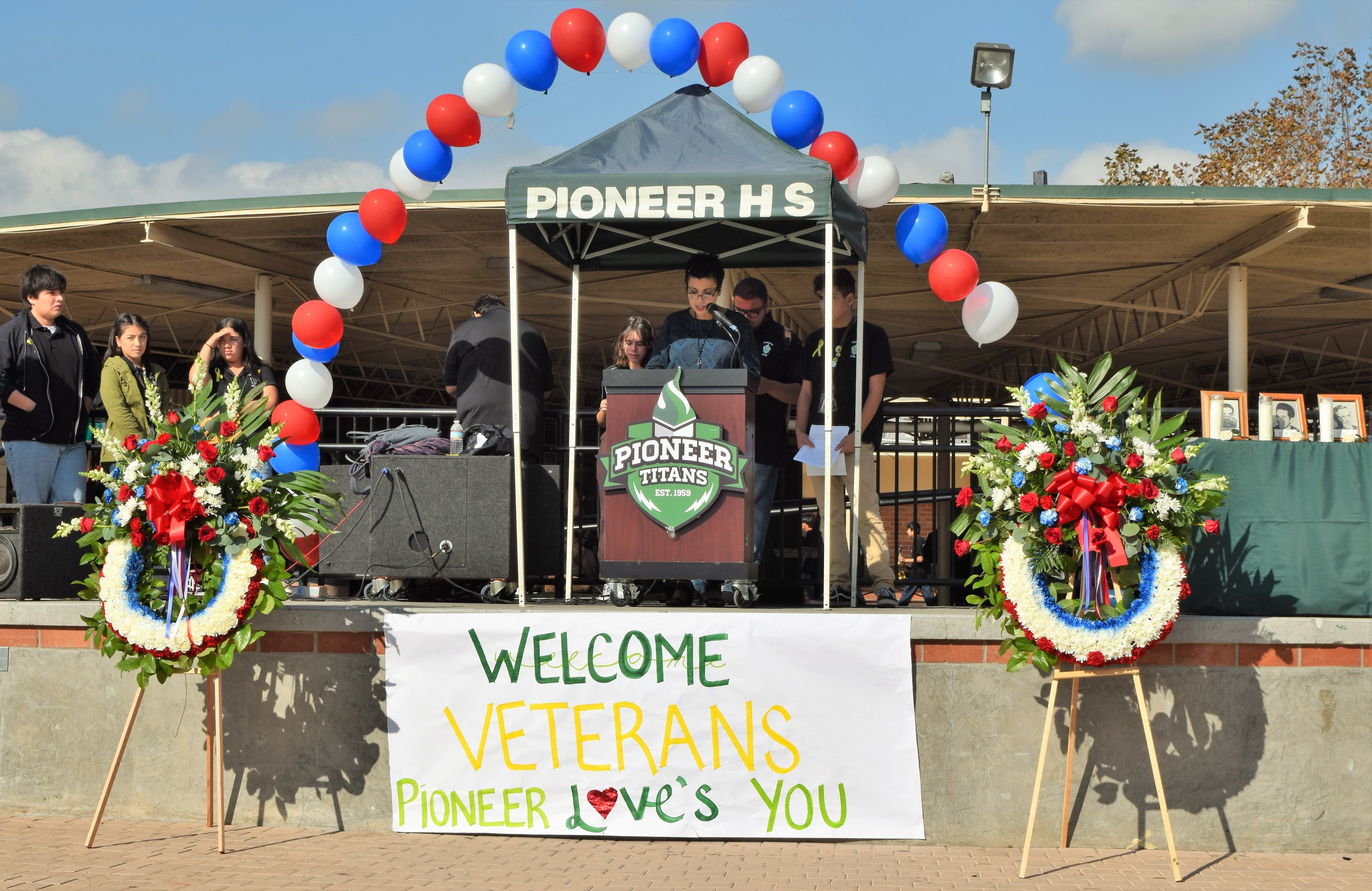 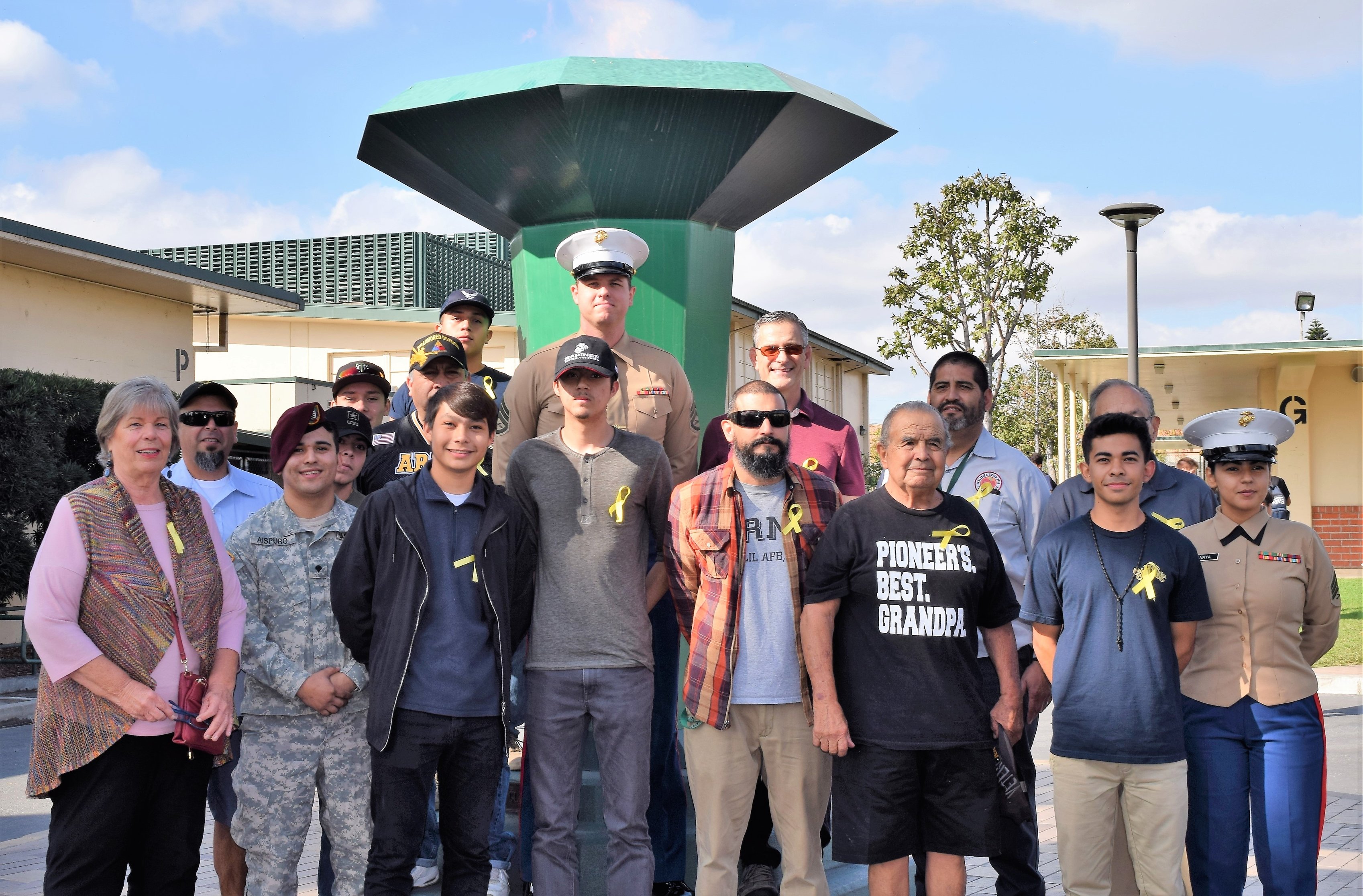