WHITTIER – When Jesse Sanchez began attending Frontier High School, he hadn’t stepped foot in a classroom in more than a year and was nearly two years behind in his coursework.

In July 2013, the teenage father, who had relocated to Whittier to live closer to his son, enrolled as a junior in Frontier with just 30 credits under his belt. With the support of Frontier teachers and staff, Jesse flourished in his new home, becoming an active member on the Associated Student Body, serving on the Superintendent’s Advisory Council and earning more than enough credits to graduate three months ahead of schedule.

He was recently recognized by the Whittier Union High School District Board of Trustees for his perseverance and dedication.

“The teachers at Frontier, which has been like a second home to me, have all been part of my achievement,” Jesse said. “My son is where my goals are. I want to be a positive role model for him so he can follow in my footsteps.”

This year alone, Jesse earned 81.5 credits – well above the 60 credits Frontier expects each student to earn each year. He completed 100.5 credits in 11th-grade. He met all of his graduation requirements, including his senior project, on March 20.

Although he has technically graduated, Jesse will remain enrolled at Frontier, which was recently named a Model Continuation School by the state, and graduate with his fellow class members in June. He will continue working on several higher level math classes in preparation for attending Rio Hondo College in the fall.

“When Jesse came to us, he knew he was going to have to work extraordinarily hard in order to earn enough credits to graduate,” Frontier Principal Margie Moriarty said. “But Jesse is a self-motivated student and a dedicated father. He is a tremendous asset to the Frontier campus and is richly deserving of the recognition from the school board.”

While at Frontier, Jesse embraced the school’s flexible course offerings, choosing to extend his school day and complete work outside the classroom to catch up on his education.

Jesse took the California High School Exit Examination (CAHSEE) in 2014 and passed both sections with proficient scores. He has received four consecutive Top Producer and honor roll awards and has been twice recognized by teachers as a Student of the Term.

Jesse plans to go into the education field and hopes to one day be an activities director at a high school – perhaps at Frontier.

SANCHEZ: The Whittier Union High School District Board of Trustees on March 10 recognized Frontier High School senior Jesse Sanchez with an Award of Merit for reaching his academic goals in spite of personal challenges. Although he was eligible to graduate three months early, Jesse will remain at Frontier and take higher level math classes in preparation for attending Rio Hondo College in the fall. 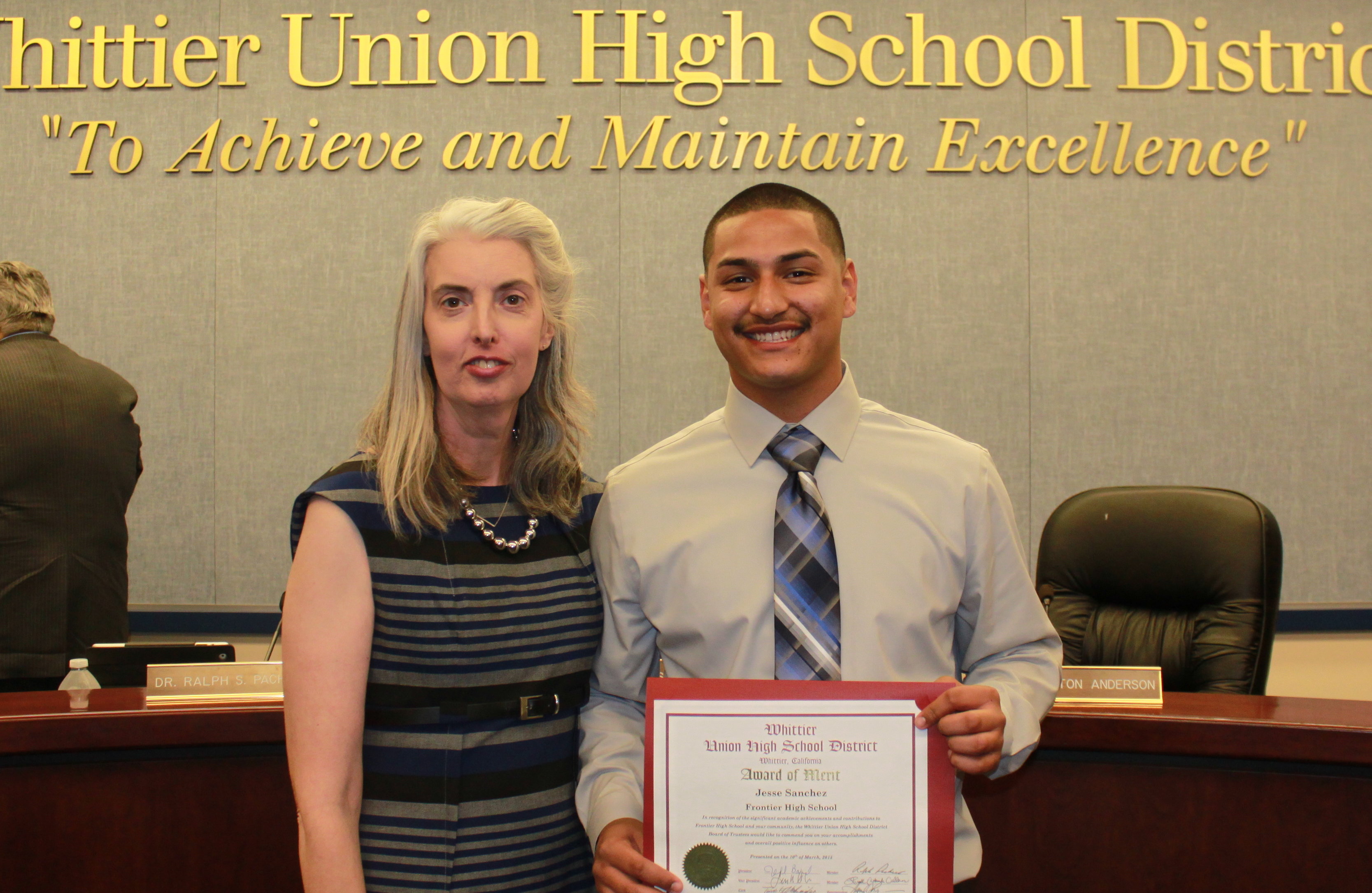