WHITTIER, Calif. – Rio Hondo College’s Yoshio Nakamura taught high school and college students about creating art for more than four decades – sharing the unique perspectives that drove the dramatic images he created on canvas, on paper and through sculpture.

Nakamura and his wife, Grace Shinoda Nakamura, are among a dozen Angelenos ages 59 to 100 whose philosophies and tips for aging gracefully are featured in the November edition of Los Angeles Magazine.

“The Rio Hondo community knows well that ‘Yosh’ still has much to offer all those who know him,” said Rio Hondo College Superintendent/President Teresa Dreyfuss. “He is, has been and will continue to be a driving force for excellence for our students and faculty. This recognition and his many other honors are well deserved.”

In the article, Nakamura, 89, cites a quote Chelsea Clinton in turn attributes to her grandmother: “It isn’t what happens to you that is important. It’s what you do when something happens to you.”
Grace Nakamura, 87, an artist and retired educator, adds to that: “I believe that you can have a fulfilled life if you try to think positively and make the most of situations, if you try to live by the Golden Rule, if you’re accepting of people, if you try to give service to others,” she told the magazine.

At age 16, he was interned with other Japanese-Americans at the Tulare Assembly Center, a converted racetrack near Fresno. He was later relocated to a camp in Arizona, where he reported for active duty in the U.S. Army in 1944.

Nakamura was sent to France and Italy, where he served with the 442nd Regimental Team, a unit made up of Japanese-Americans. He was assigned to a heavy weapons group, using deafening mortars and machine guns to wage war. In 2000, 20 members received the Medal of Honor, the nation’s highest military honor. In 2011, the unit was awarded the Congressional Gold Medal, the highest U.S. civilian honor and Nakamura received the Bronze Star.

“All of us have been through hard times,” Nakamura said. “I’ve been very fortunate to have people who have been there to help me out and give me a more positive outlook on life.”

In 1952, Nakamura earned his bachelor of fine arts from USC and began teaching at Whittier High School while he worked to complete his master of fine arts. In 1960, he was named teacher of the year by the Whittier and the San Gabriel Valley Federation of Woman’s Clubs.

In 1963, Nakamura joined the first faculty as fine arts chairman of the newly opened Rio Hondo College and, in a very real sense, found his home. Over the next 29 years, he added a series of administrative duties to his teaching role, becoming a dean and eventually a Rio Hondo College vice president.

His stamp can be seen across the College community, from the fine arts program to the Learning Assistance Center, from the fitness center to the campus gallery. All three of his children have attended the College.
These days, Nakamura doesn’t seem to have slowed much.

Since retiring, he has dedicated himself to his art, but also found time to volunteer for a number of art-centered community groups, including Whittier’s Art in Public Places Committee and Cultural Arts Commission. In January, he will join a handful of other veterans atop the City of Alhambra float in the 126th Tournament of Roses Parade. The Go For Broke float honors the Japanese-Americans who served during World War II while their family members were interned.

In February, Nakamura will be one of two featured artists at the Hillcrest Congregational Church’s 55th annual Festival of Fine Arts – an event he has been involved with since its inception.
In April, he will be inducted into the Whittier High School Hall of Fame – an honor that recognizes the scope of Nakamura’s impact – a role so strong students still stop him to say how much his classes influenced their lives.

Nakamura is also focused on an issue closer to home. His grandson, Kai Nakamura, is struggling with a heart illness that is currently untreatable. But, in keeping Grace and Yoshio Nakamura’s trademark positive outlook, the family has turned to YouTube to raise awareness and funds to help find a cure. See their video appeal at https://www.youtube.com/watch?v=2C8LMga8BRU. 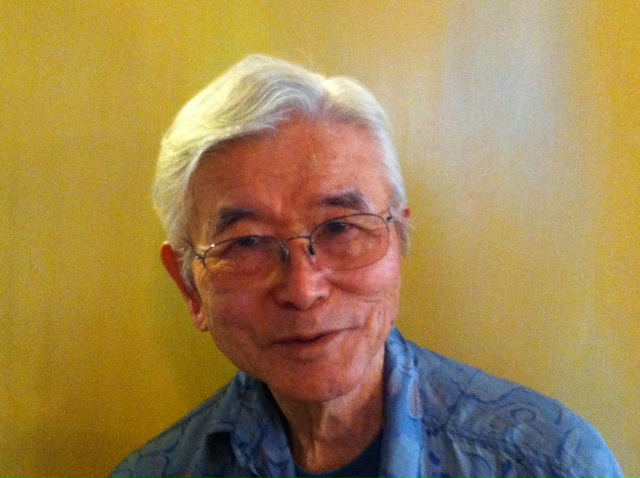