WHITTIER – Academy Award-winning filmmaker and Walt Disney and Pixar Animation Studios Chief Creative Officer John Lasseter recently returned to his old stomping grounds to be inducted into the Whittier High School Alumni Hall of Fame – an honor he shares with such Cardinal grads as President Richard Nixon and his wife, Pat, and NFL star Bob Chandler.

Lasseter, who graduated in 1975, was among five alums to receive the honor during the Whittier High School Alumni Association and Educational Foundation’s 17th annual Hall of Fame dinner held in the school’s library on April 17, when $13,000 in scholarships were awarded to 12 seniors.

During the celebratory event, Lasseter – who has produced more than 80 films for Disney and Pixar, including “Toy Story,” “Up,” “A Bug’s Life,” “Finding Nemo,” “Cars” and “Monsters, Inc.” – reminisced with his mentor and fellow inductee, art teacher Marcelo Bermudez, and recounted where he found his inspiration to pursue animation: The Whittier High School Library.

“I found a book called ‘Art of Animation’ by Bob Thomas, and it dawned on me at that point that people actually make cartoons for a living,” Lasseter told the school’s Cardinal and White School Newspaper. “It changed my life. It was one of the great moments in my life that kind of clicked and I knew that’s what I wanted to do and I never shifted from it.”

Launched in 2000, the Hall of Fame honors Whittier High graduates or staff members who have made a local, state, national or international impact. This year’s inductees included Lasseter, Bermudez, Heber Holloway (faculty and coach, 1937-1953, and superintendent, 1958-1969), businessman Steve Saleen (class of ’67) and Whittier College professor Ivannia Soto (class of ’94).

Bermudez, who was a faculty member from 1965 to 2001, recalled Lasseter’s natural talent for art.

“I knew John had that instinct of being a fantastic artist,” Bermudez said of Lasseter, who was an ASB member, water polo athlete and artist at Whittier High. “It was amazing to watch it. I’m so proud of him. I knew instinctively in my heart that there was something there.”

Student reporters Meghan Keneally and David Solorzano conducted an interview with Bermudez and Lasseter, a once-in-a-lifetime experience for the graduating seniors.

“He’s such a great icon,” said Solorzano, who plans to be a video game animator. “I grew up watching his movies and getting a chance to meet him really inspired me. This is a memory I’m going to hold dear forever.”

“He’s the creator of my childhood,” added Keneally, a UCLA-bound science enthusiast who was one of 12 students to receive a scholarship that night.

“This event not only acknowledges the tremendous work and achievements of graduating seniors, but it brings former alumni and staff back to our school to celebrate the impact they have made to our community,” Whittier High School Principal Lori Eshilian said. “It is inspiring to see such a talented, world-renowned artist like John Lasseter join our Hall of Fame. It can be said that all of our honorees this year are true role models for our students and are ensuring that the Cardinal legacy lives on.”

As a gift to the school, Lasseter donated a signed, hand-drawn picture of Woody and Buzz Lightyear, characters Lasseter created for Disney’s first computer-animated film, “Toy Story.” It is on display in a glass-enclosed case in the school’s Hall of Fame.

Additional photos are available at: http://bit.ly/1YLIa03.

HALLOFFAME1: Whittier High School 1975 graduate and Disney/Pixar visionary John Lasseter, center, was inducted into the Alumni Hall of Fame during the Alumni Association and Educational Foundation’s 17th annual Hall of Fame dinner on April 17. He is joined by Whittier Union Board of Trustees Member Dr. Ralph Pacheco, left, Superintendent Sandra Thorstenson, and Board of Trustees members Tim Schneider and Jeff Baird. 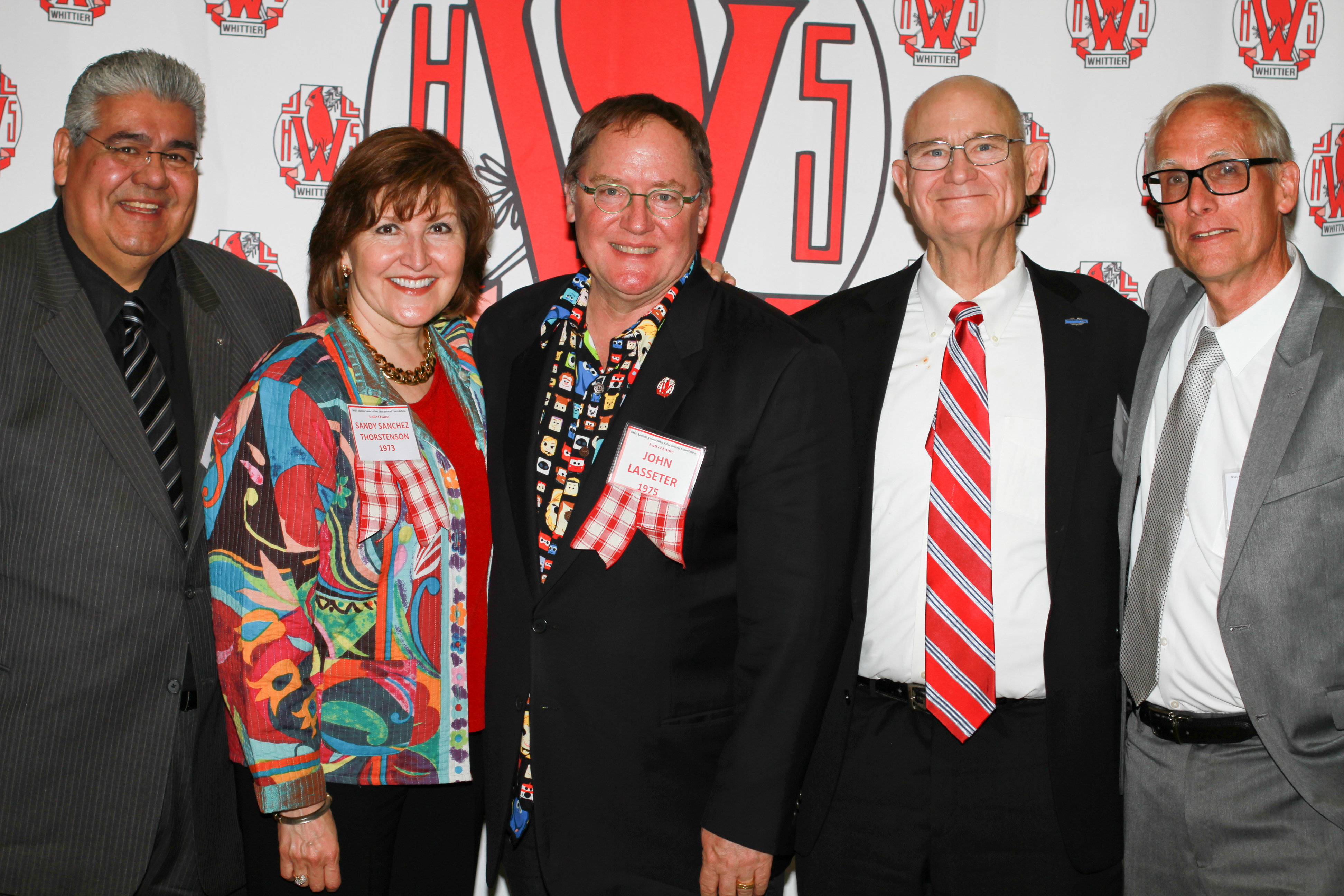 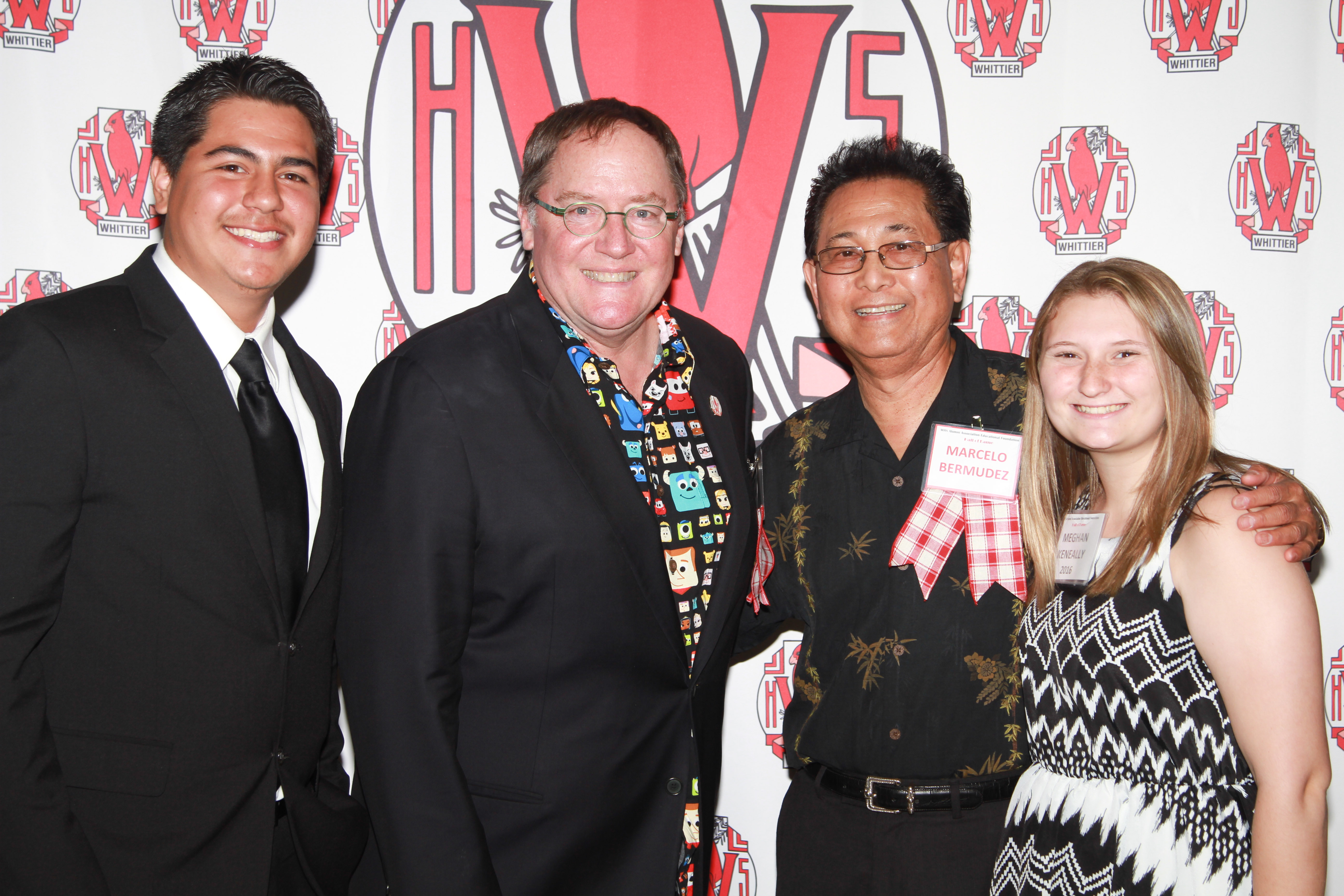 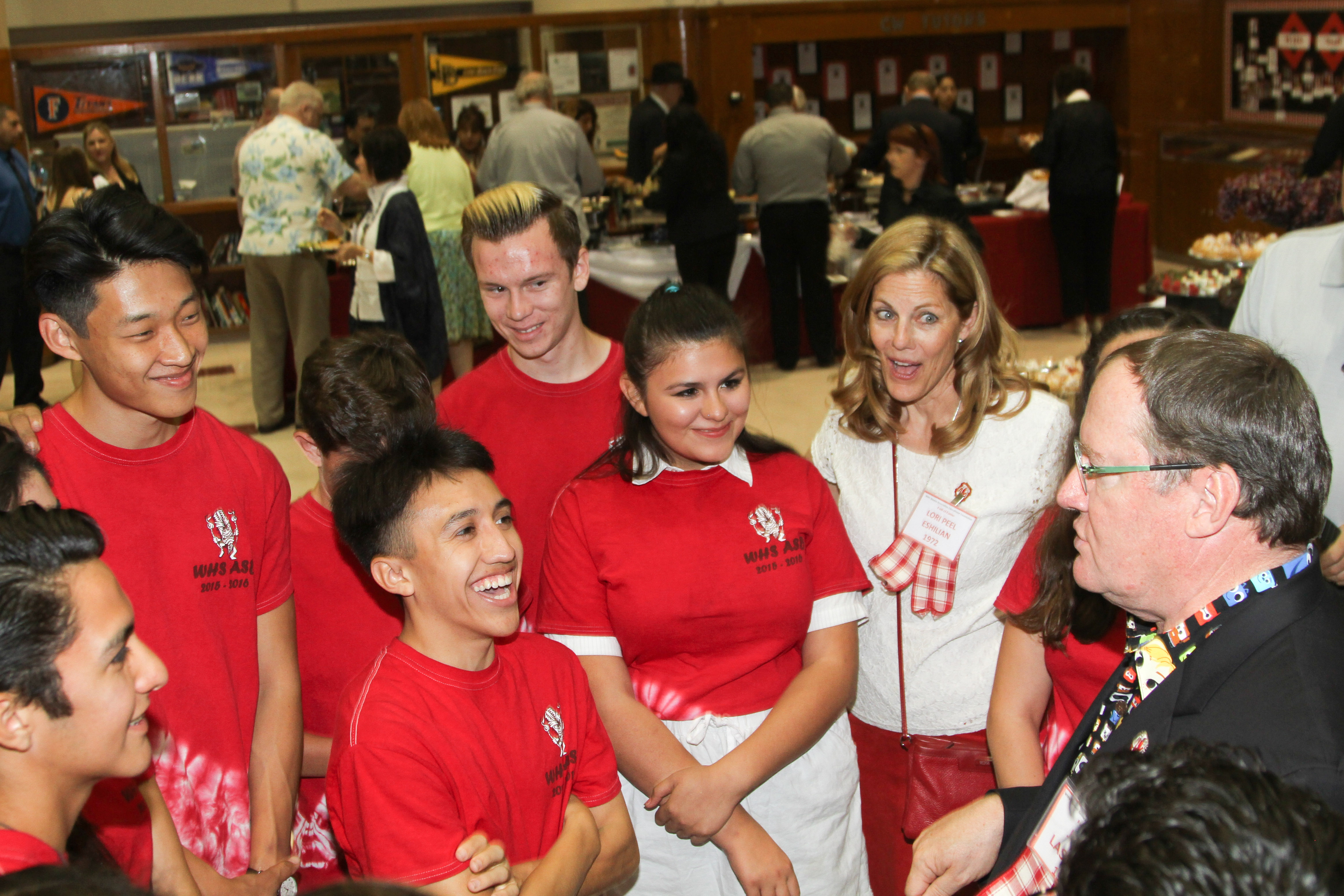