When Norwalk High School civics teacher Dean Gray was pondering ideas for a senior project three years ago, he wanted it to be engaging. What Gray he didn’t foresee was how personally meaningful his Charity for Charities project would become for so many of the students.

In an endeavor that combines research and philanthropy, seniors choose charities based on their personal connections with the issues the groups address and spend three weeks raising thousands of dollars to help those causes. Then, they present the funds to the charities during an event marked by a sharing of how the issues touched their lives, those of their classmates and their families.

This year, the seniors raised $18,000 for 12 charities, presenting the funds March 31 during an emotional two-hour affair at Norwalk High School marked with tears and cheers as the seniors relayed stories of hardship to an audience of more than 450 fellow students and guests.

“Part of teaching a government class is about teaching the value of civic engagement and community service,” Gray said. “But the passion and dedication expressed by the students has given my original idea and entirely new depth.”

At the start of the project, each senior researched a variety of charities, identifying the one he or she felt the most worthy of support, and then pitched that cause to fellow seniors in their government class. Based upon the presentations, each class selected one charity and the fundraising began.

Their classmates listened, rapt. Many in the audience wiped away tears as they learned of the painful challenges some classmates have faced. And, they cheered on the speakers who struggled through tears to tell personal stories of friends, family members or themselves.

This year, three of Gray’s students from one of his government classes had all pitched the same charity chosen by their class: Arianna Real, whose mother is on dialysis; Jian Bravo, whose younger sister endured surgery at 3 years old to treat kidney cancer; and Jennifer Molina, whose father suffered from kidney disease. All shared their loved ones’ health challenges as they presented a donation to the National Kidney Foundation.

“We need to do everything we can to address this life-threatening disease,” Real said. “My mother gave me life, and I want to give it to her.”

Senior Jorge Quintero’s government class voted to support his charity of choice – the UCLA Center for Autism Research and Treatment — after hearing about his 8-year-old nephew, diagnosed at 18 months with autism. The boy traveled with his mother from New Mexico to attend the ceremony.

“So many kids who live with autism don’t speak to other kids, and they get bullied,” Quintero said, standing with his nephew beside him. “I did this for the kids who can’t speak for themselves.”

Representatives from the charities chosen expressed their gratitude for the donations and their esteem for the senior class, including Amanda Gulsrud, Ph.D. who serves as the Clinical Director for the UCLA Center for Autism Research and Treatment.

“In looking at you kids today, I have renewed hope in the future,” she said.

NLMUSD Board of Education president Jesse Urquidi expressed pride in the students’ philanthropy and the personal nature of the fundraising effort.

“The generosity and compassion shown by these students give us reason to be proud, and underscore what a difference they can make for others in need,” he said.

Each of the following charities were presented with a check for $1,500:

Interim Superintendent Ginger Shattuck expressed her gratitude to Gray and the students.

“I want to thank the Norwalk High Class of 2015, Mr. Gray and all of the Norwalk High staff who put energy into this inspirational project to support such worthy organizations and give students the opportunity to give of themselves. They bring great pride to Norwalk High and the entire district.”

Photo 1: Norwalk High School senior Jorge Quintero stands with his nephew and family members as they present a donation to the UCLA Center for Autistic Research and Treatment. 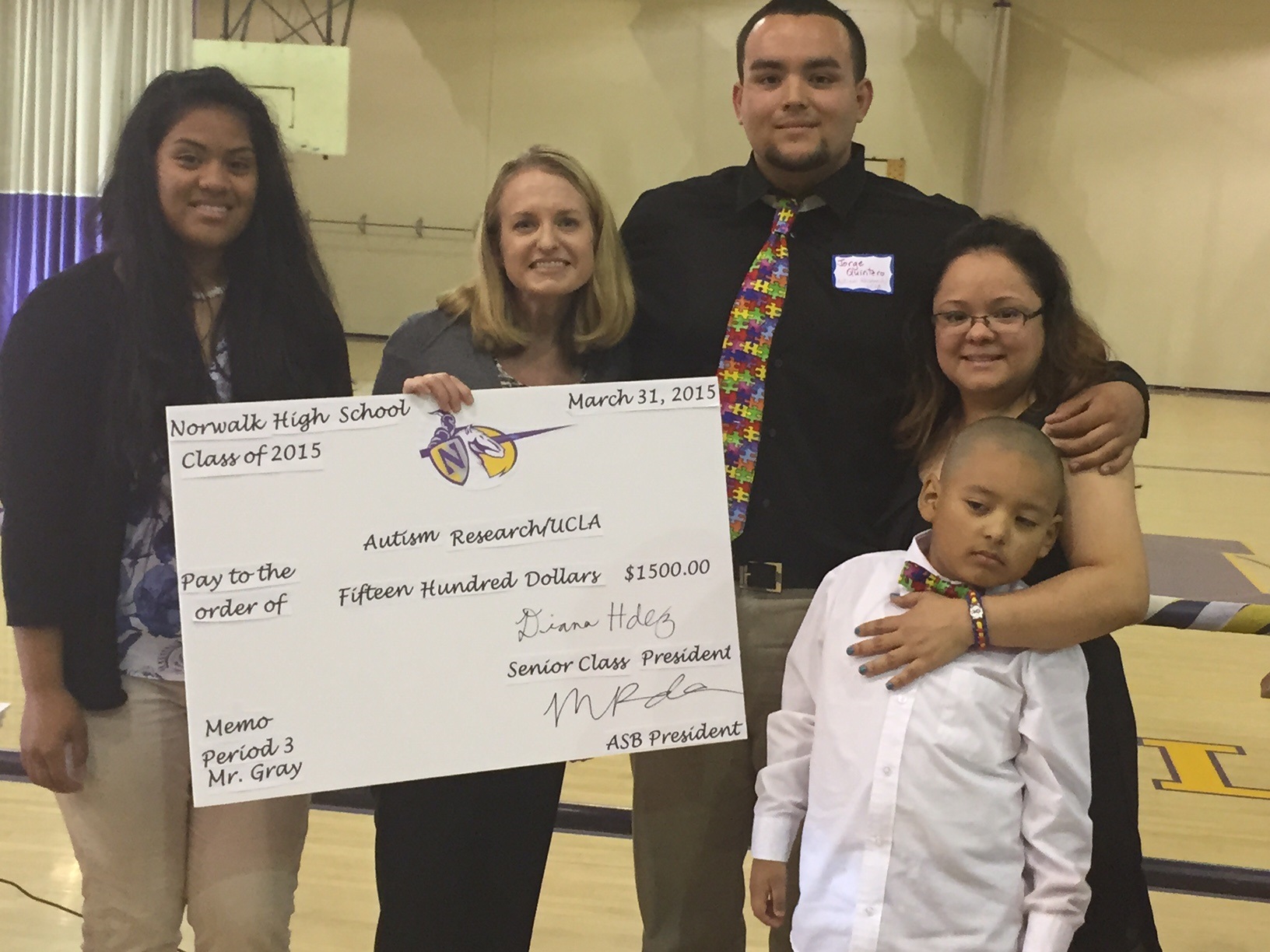 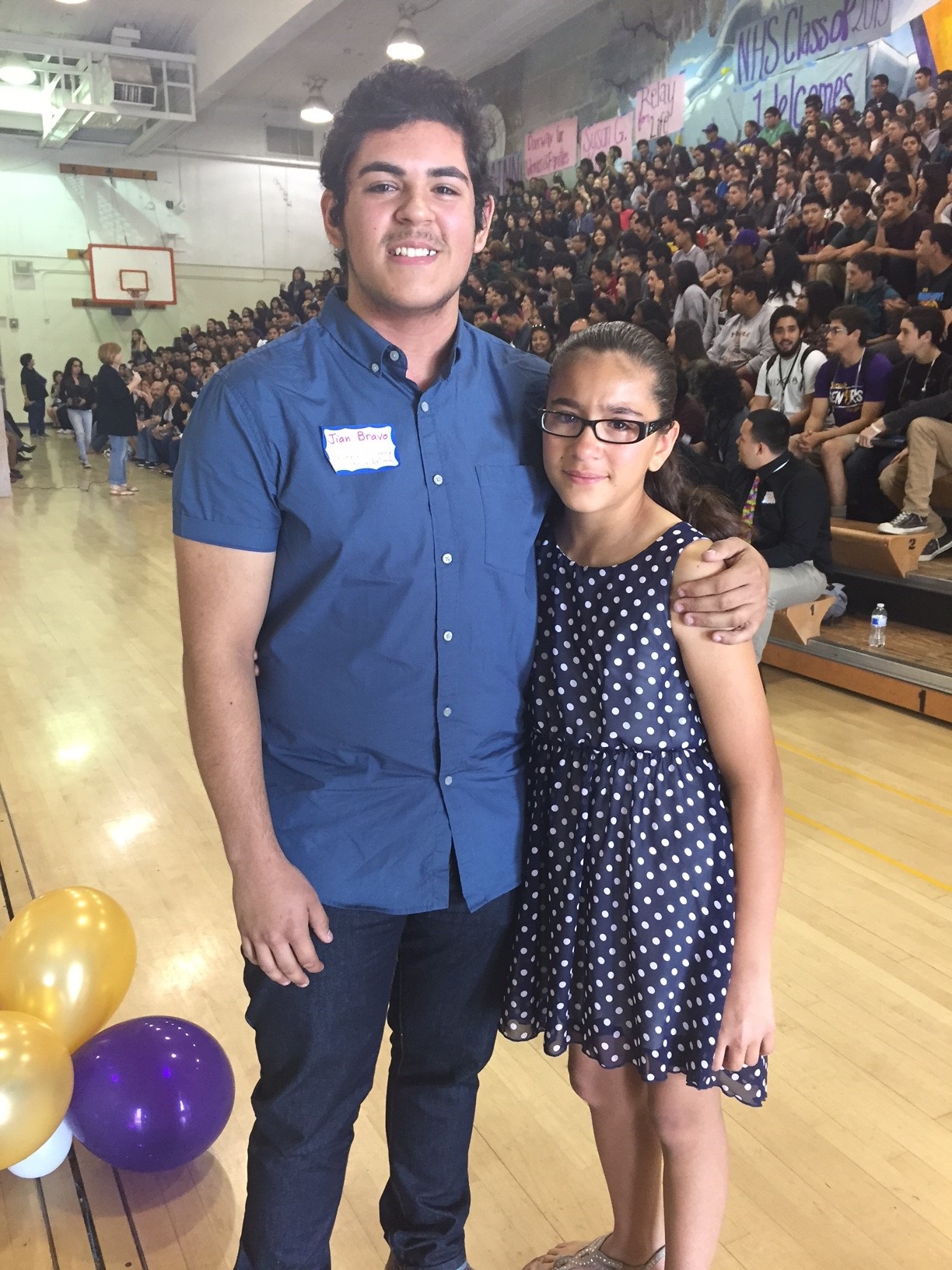 Norwalk-La Mirada Seniors Donate $18,000 for Charities During an Emotion-filled Event