The efforts are part of the school’s Civic Action Project, a project-based learning program offered through the Constitutional Rights Foundation. Students in American Government classes chose issues or problems at the school or community to improve; they research the issues, write petitions, interview community members and develop action plans.

Then, they presented their arguments for change to the Montebello Unified Board of Education, Montebello City Council, parks and recreation leaders and Montebello Bus Lines representatives. The students also wrote letters to the management at Wal-Mart and Target stores and the Los Angeles Clippers seeking donations to support proposals.

“We really appreciated the efforts of the Schurr High students in executing their civic action plans and presenting their proposals to the school board,” Board of Education President Benjamin Cárdenas said. “They came well prepared and were passionate about having these proposed improvements made to their school.”

Schurr uses the Civic Action Project as part of its Advancement Via Individual Determination (AVID) program because of its rigor and valuable lessons, Schurr instructor Jerry Ortiz said. AVID is a college-readiness program designed to help students develop the skills they need to be successful in college.

“The students learned about making changes and improving conditions at school through a hands-on approach to civics and public policy,” Ortiz said. “They examined the California Education Code to learn about the laws and statutes that were related to their proposals.”

Students proposed the water-bottle refilling stations as a way of reducing use of plastic water bottles. They examined and photographed existing water fountains and spoke with representatives from Elkay Manufacturing Co. about the cost and feasibility of replacements. The team created a petition for students and teachers to sign and met with school principal Francisco Arregui to argue their case.

A second group of students urged the school to install rails to ensure students form lines at lunchtime, to manage crowding in the cafeteria. Greater order would speed service and ensure students have enough time to eat. The students presented sketches to welding shop instructor Jeff Wallace and asked him to speak to the class about the process and costs.

Arregui said the District acted swiftly on the student proposals. The rails for the cafeteria are in place and installation of the water fountains is in progress, he said.

“We are excited to continue to work with these talented and dedicated students to address their issues and explore ways to implement their proposals into our schools,” MUSD Superintendent Susanna Contreras Smith said. “They were a great representative of Montebello Unified at the Showcase.”

MUSDCAP: Students Sandra Villanueva, left, and Bethany Vela explain the steps they took to develop and propose a solution that would better control the lunch lines at the Schurr High School cafeteria during the Civic Action Project Showcase at La Plaza de Cultura y Artes. 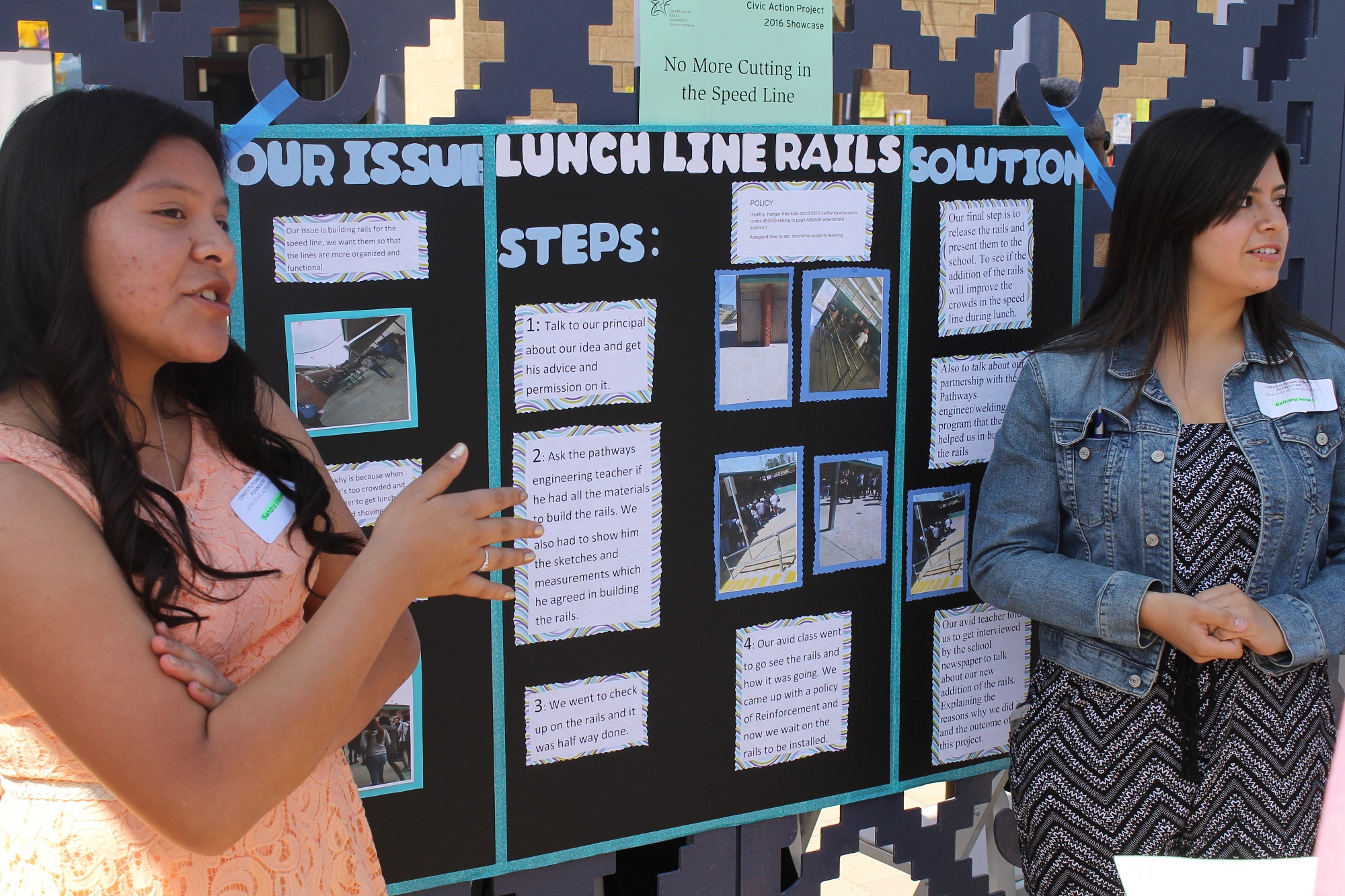