The group donned their running shoes and hit the pavement for an 18-mile Friendship Run at Hansen Dam Park on Feb. 12, the latest test in their buildup for the big race in March.

Students Run LA was founded in 1989 by continuation school teacher Harry Shabazian, and aims to provide school-based mentoring and physical fitness to seventh- to twelfth-grade students in the greater Los Angeles area.

“We thought it seemed like a cool concept, to actually train with the kids instead of being an observational coach,” Los Nietos SRLA Coach Erika Rose said. “Now, years later, we’ve seen firsthand at-risk students who finish the program go on to achieve amazing things they never dreamed they could.”

Rose, who also teaches seventh-grade language arts and history, cofounded the Los Nietos SRLA program in 2005 with teachers Christina Fontenot, William Chavez and counselor Rita Morales. The three had considered running marathons on their own when they discovered the program and decided to bring it to Los Nietos.

With the help of three coaches and two adult volunteers, Rose guides students through a long, rigorous training schedule. The leaders run with students divided into pacing groups, which are determined by how long it takes runners to finish a mile. These pacing groups allow students to participate at their own rate without the worry of being left behind.

SRLA often starts with a much larger group of students; some get too tired or intimidated by the training. Those who stick around, according to Rose, develop unlikely, but close friendships with their pacing groups.

“There’s something very unique about running groups,” Rose said. “It’s not glamorous to do this. You experience a lot of pain and grossness along the way, and that kind of intense training and will to endure can create lasting bonds.”

Students practice three times a week for a total of 22 to 25 miles, in addition to the occasional “milestone” events. Practice began in August with a one-mile run, and students progressed to 5K and 10K runs in October before moving to a nine-mile race in November, half-marathons in December and January, and concluding with the 18-mile Friendship Run on Feb. 12. The students will run 26.2 miles in the LA Marathon on March 19.

Rose said this program helps students build endurance and confidence as they learn about the importance of training and goal-setting.

“Students learn to set small, attainable goals, and once they are able to achieve them, they begin to dream bigger,” Rose said. “Before you know it, they are setting and reaching goals they had never thought possible. That is what this program gives them – a positive outlet that fosters a desire to succeed.”

SRLA also encourages involvement from Los Nietos parents. Nearly every student participating in the program this year has a parent who volunteers at the runs, from manning water stations, providing snacks, to providing encouragement at various points of the strenuous runs.

“We are excited to watch our students embrace the challenges presented by Students Run LA and surpass even their own expectations of success,” Los Nietos Superintendent Jonathan Vasquez said. “This successful program would not be possible without the determination of our students and the dedication of our Los Nietos parents, staff and community.”

022717_LOSNIETOS_STUDENTSRUNLA1: Los Nietos Middle School teacher Desiree Chavez takes a breather with a student at the nine-mile mark during the 18-mile Friendship Run at Hansen Dam Park on Feb. 12.

022717_LOSNIETOS_STUDENTSRUNLA2: Los Nietos Middle School students and coaches celebrate the school’s 12th year of participation in the Students Run LA program, which is designed to mentor students while improving their health and demonstrating the positive effects of rigorous training. 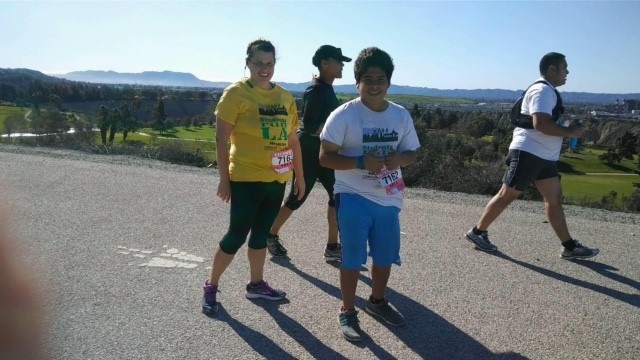 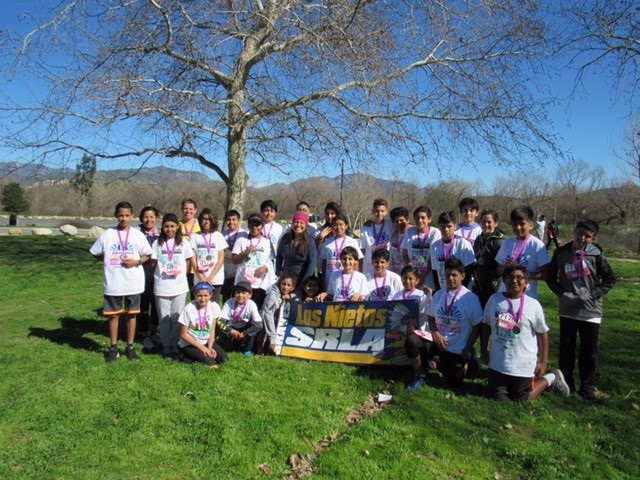