Students of the La Mirada High School Model United Nations hosted a Human Rights Assembly on Feb. 20 to raise awareness about the abuse of human rights across the world, weaving in skits representing those rights and presenting the story of one club member whose grandmother has been held in a North Korean concentration camp for the last six years.

Globally recognized as World Day of Social Justice, Feb. 20 is one of three internationally observed days by all United Nations countries. This day of observance’s goal is to promote poverty eradication, the promotion of full employment and decent work, gender equity and access to social well-being and justice for all.

“It is important for us to spread the word about knowing what human rights are,” said Nicole Tate, Model UN Secretary General. “As a high school senior, I believe you can’t stand up for yourself if you’re not aware of the basic human rights we are all entitled to.”

The assembly began with a welcome and introduction by Tate and was followed by a PowerPoint presentation led by Erick Ceballos, Model UN Director of Political, Social, Economic Affairs and Education. The presentation featured several historical figures who fiercely advocated for social justice, including Rev. Martin Luther King, Jr., Mahatma Gandhi, Nelson Mandela and Cesar Chavez.

“These men and women did not stop until they were considered as human as when they first entered this Earth,” Ceballos said. “Their goal was to help everyone be recognized as a full-fledged human. However, in the face of blockade, there is not always resolution.”

Ceballos then introduced fellow student Kevin Park, Model UN Director of Media and Outreach. A junior at La Mirada, Park is the son of a North Korean refugee. His grandmother is currently being held in a North Korean internment camp.

Standing in front of a slide showing an enlarged photo of his grandmother, father and uncle from the 1970s, Park solemnly addressed the crowd. He emphasized the importance of raising awareness about human rights abuses and shared his personal experience.

“My grandmother is 81. She has been held in a political camp for six years,” he said. “Her crime? Crossing the river to escape multiple times.”

The assembly segued into human rights skits, led by members of the La Mirada Drama Club. Examples of bullying, discrimination, and infringements of privacy were acted out to demonstrate how globally held ideas of rights infringement happen on a local, personal level on a daily basis.

“The students were really into it and quiet,” said Norma Williamson, La Mirada High’s Model UN adviser. “Inside of the classroom, students are normally talking when we try to cover this information. But presenting the information in this format seemed to capture their attention really well.”

The Norwalk-La Mirada Unified School District recognized the club for its efforts to raise awareness on these important issues.

“We are so incredibly proud of our students for sharing their knowledge on this critical topic,” said NLMUSD Board of Education President, who presented students with a certificate for their efforts. “These are rights that we sometimes we take for granted, but it’s so important to be reminded that not everyone is afforded these rights.”

The La Mirada High School Choir performed Bob Dylan’s “Blowin in the Wind” and invited students to sing with them.

Together, members from Model UN, Drama, and the Choir read the Universal Declaration of Human Rights. The 30 articles are a comprehensive listing of key civil, political, economic, social and cultural rights that were adopted on Dec. 10, 1948. They arose directly from the experience of the Second World War and represent the first global expression of rights to which all human beings are inherently entitled.

“It’s beautiful to have an outreach to the student body. It’s important that, even if we aren’t old enough to vote, that we still treat one another with respect,” Ceballos said.

The Model UN plans to present the content from this assembly to other schools in the Norwalk-La Mirada Unified School District.

“These students are truly leaders in their community and our entire school district,” said NLMUSD Interim Superintendent Ginger Shattuck. “I look forward to students throughout Norwalk-La Mirada being able to learn from the Model UN so that they can understand and be informed their rights as individuals.”

MODELUN2: Kevin Park, a Model UN member at La Mirada High School recently shared the story of his grandmother, who has been held in a North Korean concentration camp for the last six years. 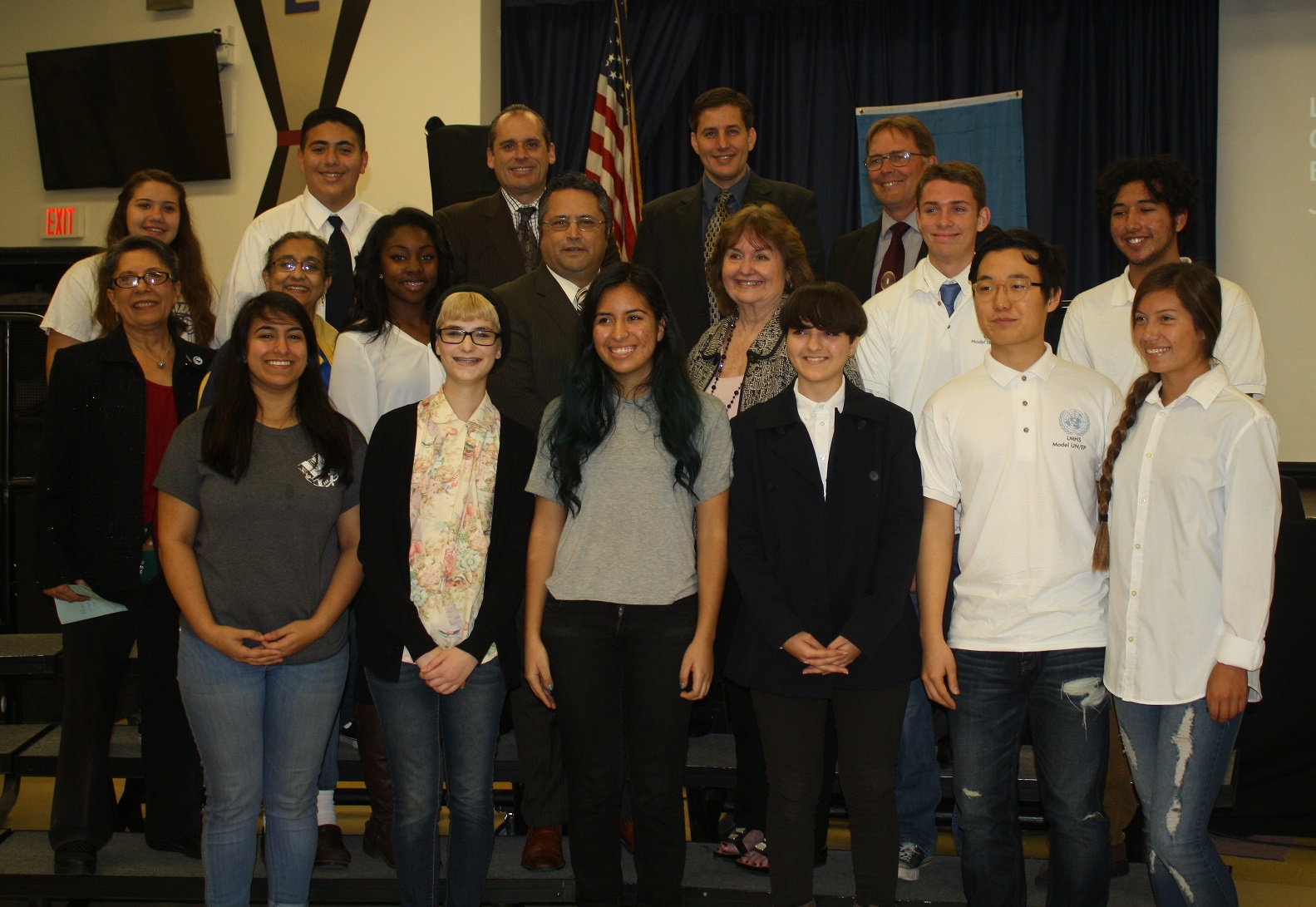