“I congratulate the players and coaching staff of the La Mirada High girls soccer team,” said Norwalk-La Mirada Unified School District (NLMUSD) Interim Superintendent Ginger Shattuck. “At the District, we strive for dedication and teamwork – two hallmarks of success. At La Mirada, these athletes have set an example we can all be proud of.”

La Mirada High’s success, both on and off the field, has not gone unnoticed.

The school attributes its success to a rigorous training program, outstanding student-athletes and well-rounded education program that prepares students for college and career.

“We call them ‘The 4.0ers,’ ” said coach Dave Christensen, referring to the students’ stellar grade point- averages. “They are very driven, on and off the field.”

Christensen, who has coached the La Mirada squad for five years, lays the groundwork for success the moment students arrive on campus as freshmen. They immediately take to the field for speed training along with the junior varsity and varsity teams.

“We want the younger students to look up to the older graduating students,” Christensen said. “We say tradition never graduates.”
He encourages them to play club soccer outside of the school –Langenberg, Baran, Gooch and Sanford all belong to the same top-rated Orange County Premier club team. And, to ensure students play at their top form, Christensen uses the “Competitive Cauldron” training system during practice, tracking player performance on every skill and posting their results daily.

“Playing soccer for Coach Christensen at La Mirada High School has been a great experience,” Baran said. “I have made many lifelong friends and have learned more about myself as a player and as a person.”

NLMUSD Board President Jesse Urquidi expressed pride for the team’s performance and dedication as student-athletes.

“We are justifiably proud of our athletic program at La Mirada High,” Urquidi said. “Our sports and extra-curricular programs provide a closer connection between our students and their campuses and there is no doubt that the entire high school can celebrate this historic victory. We wish the team and the seniors leaving for college in the fall, continued success in all that they do.” 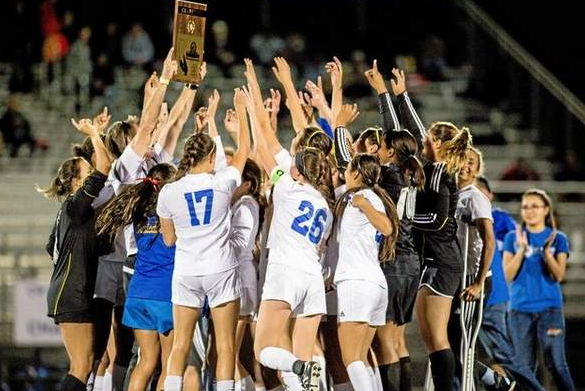