It’s not easy to be a teenager with special needs — to be seen as “different” from your classmates – but they continue to have the full support of the JGHS student body, who will be cheering them on when Mata, Velasquez, Sanchez and their special education peers compete in a track meet on Friday, May 8 from 9:30 to 11 a.m.

The goal is to have every JGHS special needs student participate in one of the four to five athletic events. The event is being organized by JGHS’s Academy for Careers in Education (ACE) program – which offers students a track to a career in teaching. The ACE program includes several students who say they are inspired to work with special needs students after getting to know kids like Sanchez, Mata and Velasquez.

Mata and Sanchez both attend Linda Parra’s special education class where they are learning life skills needed for independence and will earn a certificate of completion. Velasquez is on his way to earning a high school diploma. And all three are competitors on Team Norwalk, the city’s Special Olympics program, in which they train with coaches on track and field events two days a week for 100- and 200-meter races at events throughout Southern California.

Parra, a special education teacher and the athletic director, encourages students to try out for Team Norwalk because it allows them to explore the broader world, meet new people and build their confidence.

“I encourage them to get involved in the Special Olympics as a way to get their children engaged in outside activities. Gaining that trust of others is important. I want them to get out there,” she said.

All three students say they feel nervous and excited about meeting new people, especially during their Special Olympics involvement. That excitement was never higher than this spring when the student body cheered Sanchez’ selection to compete in the 2015 Special Olympics World Games in Los Angeles this summer as part of Team USA.

“When the principal stood with Destiny at the pep rally and made the announcement, you could see that everyone in the student body was inspired,” Parra said. “Every kid in that gym was happy and proud, and they wanted to make her feel so special.”
Parra says that kind of support really boosts the kids’ confidence. Sanchez said it felt nice to have the whole school cheer for her.

The Special Olympics isn’t the only way JGHS special needs students are connecting to the outside world. Sanchez, a sophomore, spends two mornings a week volunteering at a retail clothing store at Norwalk Square to stock inventory as part of the District’s Workability Program. The program places special needs students in workplaces through a partnership with area stores. Mata also volunteers at various job sites through the Workability Program, and all of Parra’s students will have this experience over the course of the school year.

JGHS High Principal Greg Puccia credits the teachers and students both for the supportive atmosphere at his school.

“The big positive for me is the connection that our general education kids make with our special needs students, and that experience helps diminish the awkward feelings they may have about how to act around people who are different,” he said.

The smallest of the three NLMUSD high schools, JGHS educates the largest special education population in the district, including the highest amount of students with the most severe needs.

“We know the most growth for all students occurs when kids are comfortable and not afraid to take risks, because they don’t have a fear of being made fun of,” said Interim Superintendent Ginger Shattuck. “Our special education programs allow students the opportunity to blossom, whether they are earning a Life Skills Certificate of Completion or a high school diploma.”

“Creating a sense of community across all students is one of the intangibles of a great school, and the staff and students at JGHS are a great example of just that,” NLMUSD Board of Education President Jessie Urquidi said.

JGHS students connect with their special education population on a daily level as well. Every two weeks you can find members of the Varsity Club, a group comprised of special needs students, student government leaders and sports team captains, having lunch together and playing games.

“When I go there, what I see is the nondisabled kids having a ‘wow moment’ that was not what they expected,” Principal Puccia said. 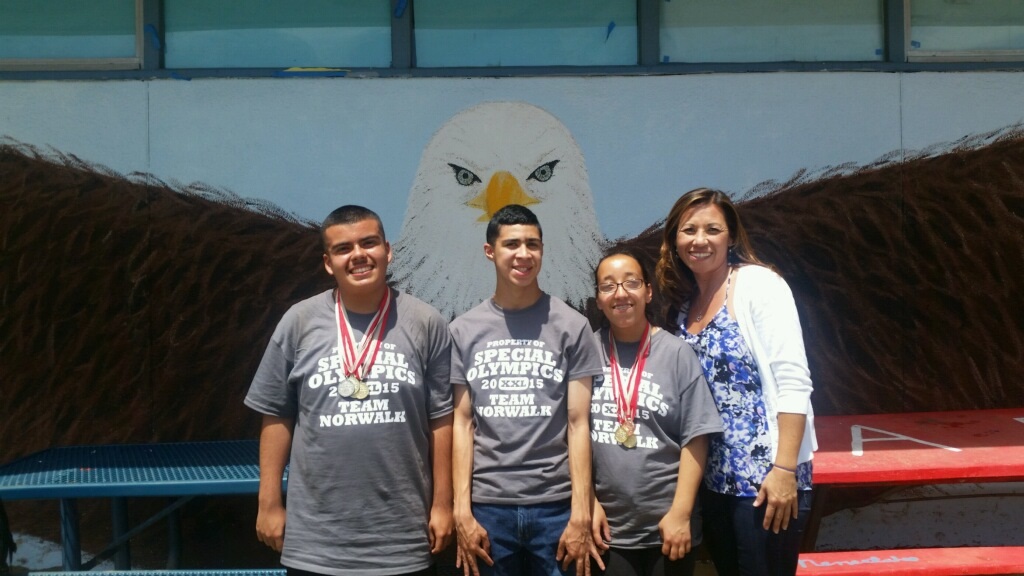