WHITTIER – Although Lisbeth Lozano enrolled at Frontier High School in January 2015 as a second-semester sophomore with zero credits, her desire to graduate early was anything but hindered.

Lozano had not attended school for three years leading up to her enrollment at Frontier, having moved from Riverside to her family’s home country of Guatemala. Despite the odds against her, the Aztec worked her way to the top of her class, earning a 3.89 GPA and completing 136 credits in one calendar year — more credits than any on-track student would complete in two years.

“My family, teachers and staff helped me overcome any difficulties I had when I first started classes last year, and they were the ones who encouraged me to try my hardest to catch up and go beyond,” Lozano said. “They showed me that if I have enough passion and dedication, anything is possible.”

For her devotion to rising above unprecedented challenges, Lozano received an Award of Merit from the Board of Trustees on March 8.

Lozano now attends 11th- and 12th-grade classes and is on her way to early graduation, something she heard has only happened once before at Frontier.

“When I first started classes, my computer teacher told me about a student who started out with only a few credits and was able to graduate early,” Lozano said. “I figured, why couldn’t I do that starting off with zero?”

Lozano is well on her way to accomplishing this extraordinary feat by taking on extended school days, summer school and extra projects to make up for her absent credits.

In addition to her academic commitments, she is an active member at Frontier’s Associated Student Body (ASB) and attributes her growing confidence to her involvement in the group.

She also serves as the president of the school’s S Club, an organization sponsored by the Whittier chapter of Soroptimist International that mentors young women on volunteerism. Lozano was nominated to receive the group’s Lois Neece Overcomers Award, which recognizes high school students who overcome adversity to accomplish major feats.

“It makes me so proud to see her complete an unbelievable amount of credits in the short amount of time she did and place No. 1 in her class,” Principal Margie Moriarty said. “Although she faced many obstacles toward achieving educational success, I have no doubt that her dedication will launch her to an early graduation and successful future.”

Lozano plans to attend Rio Hondo College and has already taken entrance exams for admittance. She hopes to transfer to a four-year university and ultimately earn a master’s degree in counseling so she can become a school counselor and mentor teens.

“I am so amazed by students like Lizbeth, and I cannot express strongly enough the deep gratitude I have for our teachers and staff who help students like this determined young lady get ahead,” Superintendent Sandra Thorstenson said. “This is yet another example of how our collaborative culture produces successful and talented students who are prepared to take on every opportunity in store for them.”

LOZANO: Lisbeth Lozano enrolled at Frontier High School as a second-semester sophomore with zero credits, having lived in Guatemala for the previous three years. She is now No. 1 in her class and on track to graduate early, earning her an Award of Merit from the Whittier Union High School District Board of Trustees on March 8. She is pictured with Principal Margie Moriarty. 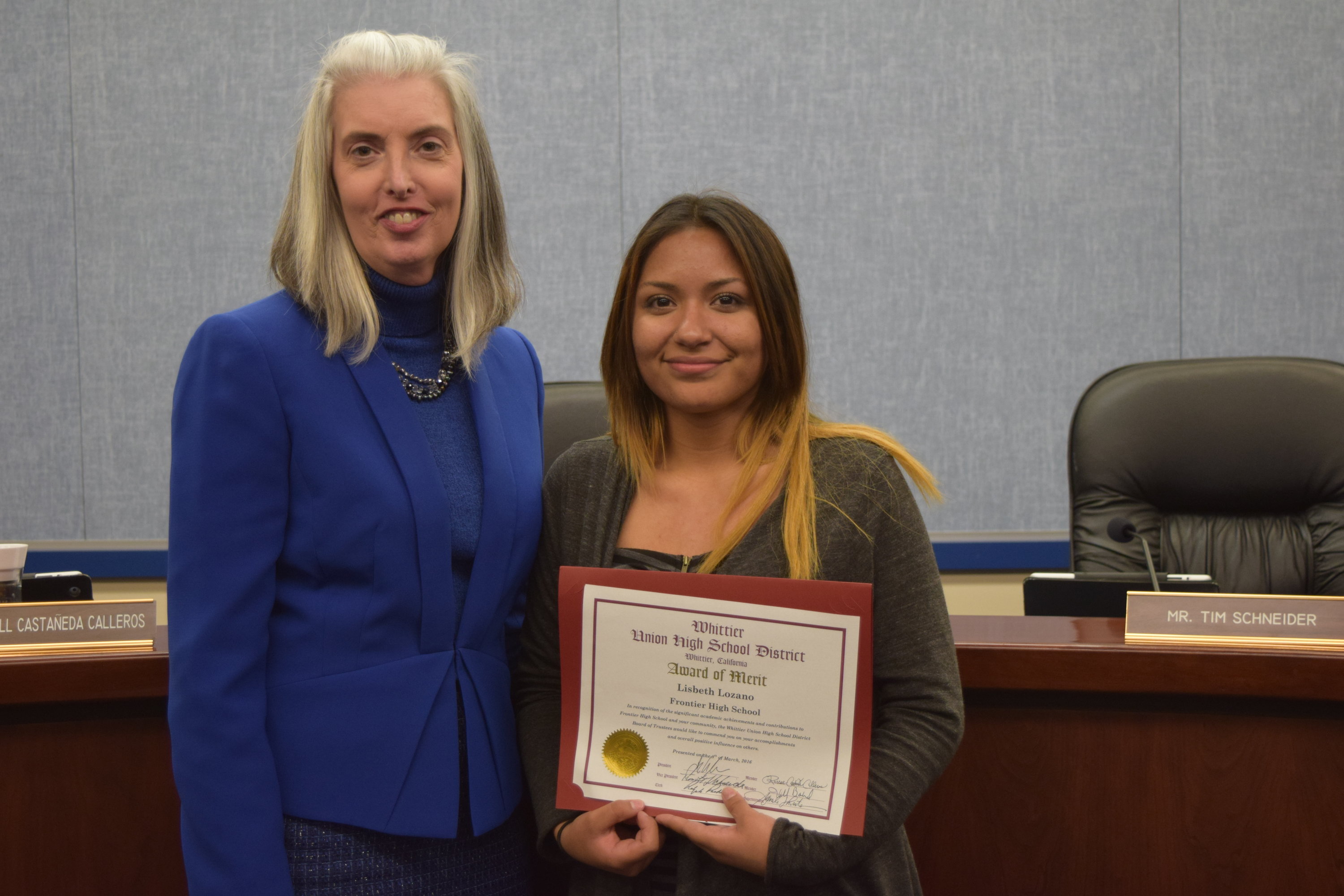 Frontier High Sophomore Works from Ground Up to Earn No. 1 Spot in Class