La Mirada – Dulles Elementary’s beautiful tree-lined campus has for generations brought the tight-knit community surrounding it a little closer. Each school year culminates in a Family Picnic night with teachers, parents and students enjoying a festive evening of barbeque and dance performances. This year’s picnic, held June 5, was all the more special – a 55-year anniversary gala that brought together more than 400 past and present Dulles family members to reminisce and share good times.

Dulles, a 2014 California Distinguished School, opened in 1960 during the Dwight D. Eisenhower administration and is named for prominent American statesman John Foster Dulles. The school has a loyal assemblage of alumni and staffers, with many bringing their own children to Dulles to start their academic journeys.

“It was touching for me to see the turnout, bringing together teachers, principals, staff and students,” said Dulles Principal Robin Padget, who organized the anniversary party. “It was warm and welcoming.”
Highlights included the “Dulles Through The Decades” musical revue, with K-5 classes dancing and singing classic songs from the 60’s and the 70’s (“Wipeout” and “YMCA”) to the present (“Happy”); movie- and beach-themed silent auction baskets; arts and crafts booths and large poster boards filled with pictures from Dulles yearbooks of the past.

Among the attendees were NLMUSD interim Superintendent Ginger Shattuck and Board Members Karen Morrison, Chris Pflanzer and President Jesse Urquidi, who was greatly impressed with the magnitude of the event. Also in attendance were La Mirada City Council members Larry Mowles, Ed Eng and Mayor Pro Tem Steve DeRuse, who presented Padget with a plaque and certificate of recognition, as did Cerritos College Board Member Zurich Lewis.

“This is a tremendous and well-deserved celebration,” Urquidi said. “As I look around, all I can see is happiness and accomplishment. Congratulations to Robin and her staff and all who contributed to this special occasion.”

Between the dancing and award presentations was a full night of erstwhile colleagues catching up. Former Dulles principal Mary Ann McCuiston shared news of her two new grandchildren with former resource teacher Rae Lynne Wright, who recalled her most beloved moment at Dulles, watching a student holiday musical performance “Let’s Hear It For America” presented shortly after 9/11.

It was Wright who, in 1984, wanting to pay homage to the upcoming Olympic Games in Los Angeles, coordinated an end-of-the-year international dinner complete with a flag ceremony and global cuisine. This dinner was so well-received it evolved into the Family Picnic night, which has now been a Dulles tradition for more than 30 years.

Padget hopes to start a new tradition by offering community members a chance to buy a memory tile to commemorate their time at Dulles, to be placed on a special wall in the cafeteria. More than 60 3-inch by 3-inch tiles were sold. Padget plans to make larger ones available for families who have had all of their children attend Dulles.

Throughout the night, animated conversations returned to the sublime beauty of the Dulles campus, an ongoing legacy of Dulles parents and PTA members who year after year continue to fully commit themselves to keeping the elementary school picturesque.

“It is such a beautiful campus,” said Wright, who worked at Dulles from 1978 to 2009. “For the longest time, on Arbor Day, the PTA would come in and plant trees, many of which are dedicated to Dulles staff who have passed on. This is truly a wonderful community.”

DULLES1 and DULLES2: Dulles Elementary K-5 students danced and sang classic songs from the 60s and 70s during the school’s 55th anniversary celebration on June 5. 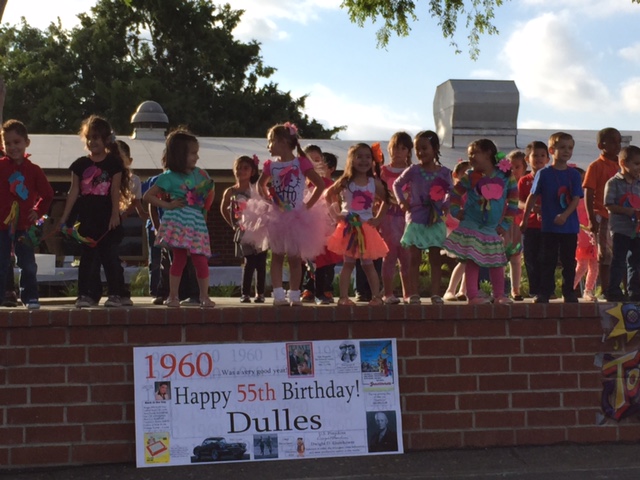 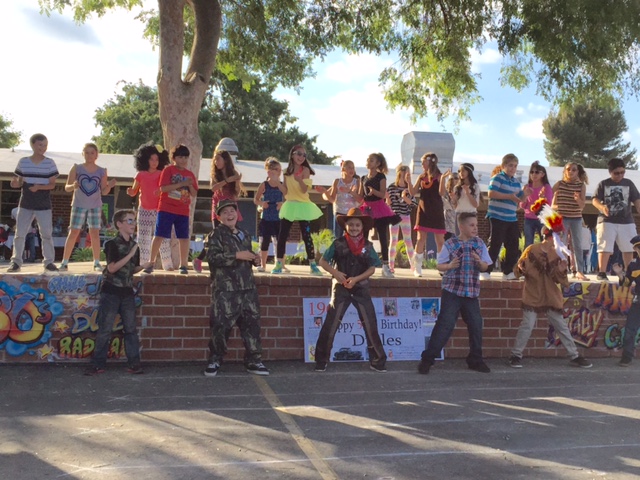