Lynwood, Calif. – Rising up from the transcendent beauty of a freshly planted flower and vegetable garden were the comforting tones of the Rosa Parks Elementary School Choir singing “See You Again” in memory of their beloved kindergarten and fourth-grade teacher, Erica Lott Munn, who passed away earlier this year a week before her 45th birthday.

City, community and school leaders, along with Southern California business partners, came together May 29 to dedicate the Erica Lott Munn Memorial Garden during a special Beautification Day at the Lynwood campus, which was awarded a grant from the Los Angeles Office of Education (LACOE) to create the three raised-bed vegetable gardens.

“Teachers plant seeds of knowledge and then nurture them to success,” LUSD Board member Gary Hardie Jr. said. “Be proud of what you have done here. Ms. Munn would be proud of you.”

Munn was a Los Angeles native who spent 17 years with Lynwood Unified, beginning at Abbot Elementary before coming to Rosa Parks Elementary to teach kindergarten and, for a short period, fourth grade. She married Tuan Munn in 1993 and they had one daughter, Taylor Anne, who is now 19 years old. Munn’s passions were camping and music.

In an emotional ceremony that encompassed the entire Lynwood community, Lynwood City Council member Aide Castro issued an official city proclamation in memoriam of Munn, while a Certificate of Appreciation was presented on behalf of Assemblyman Anthony Rendon.

“We are beholden to our inspirational instructors, who do more than just teach their students, they instill wisdom and guidance. Erica Munn was someone we could all look up to,” LUSD Superintendent Paul Gothold said. “We will miss her greatly, but her legacy will last forever in the achievements of her students.”

Community member Jackie Espinoza reached out to her employer, Mars Food North America, to support the school garden project and its dedication to Munn. Volunteers from the company presented a gold-plated plaque in Munn’s honor, carved with the inscription: “The influence of a great teacher can never be erased.”

Mars Food associates and community volunteers supplied labor for the Munn Garden, donated gardening materials, and provided sustainably grown seeds to plant a wealth of spices, flowers, vegetables and even a peach tree and nectarine free. Mars Inc. is the parent company of Seeds of Change, a leading producer of sustainably grown seeds and certified organic foods.

But the day really belonged to Rosa Parks’ students, many of whom were eager to get their hands dirty and put last-minute touches on the garden. They were clad in purple shirts, which made for a sea of the Rosa Parks Elementary school color that washed over the playground.

Fifth-grader Richard Solis, who is also serving as Lynwood’s current Kid Mayor, began the dedication by praising Munn, then later shared a tearful embrace with her family. Fifth-grader Aydee Paredes followed with her own recollections.

“Ms. Munn was very compassionate. The students loved her,” Paredes said. “She loved everyone and everyone loved her.”

A rendition of a Wiz Khalifa hit song by the Rosa Parks choir, under the direction of Gordon, brought the crowd to its feet, with choreographed dancing and rap solos from fifth-graders Solomon Islam and Denise Palafox.

RosaParks1: Students from Rosa Parks Elementary School plant flowers and herbs during a campus beautification day on May 29. City, community and school leaders, along with Southern California business partners, also came together to dedicate the Erica Lott Munn Memorial Garden. Munn taught in the District for 17 years before her death earlier this year a week before her 45th birthday.

RosaParks2: Children from the Rosa Parks Elementary School Choir sing “See You Again” in memory of their beloved kindergarten and fourth-grade teacher, Erica Lott Munn, who passed away earlier this year a week before her 45th birthday during a beautification day at the campus on May 29. 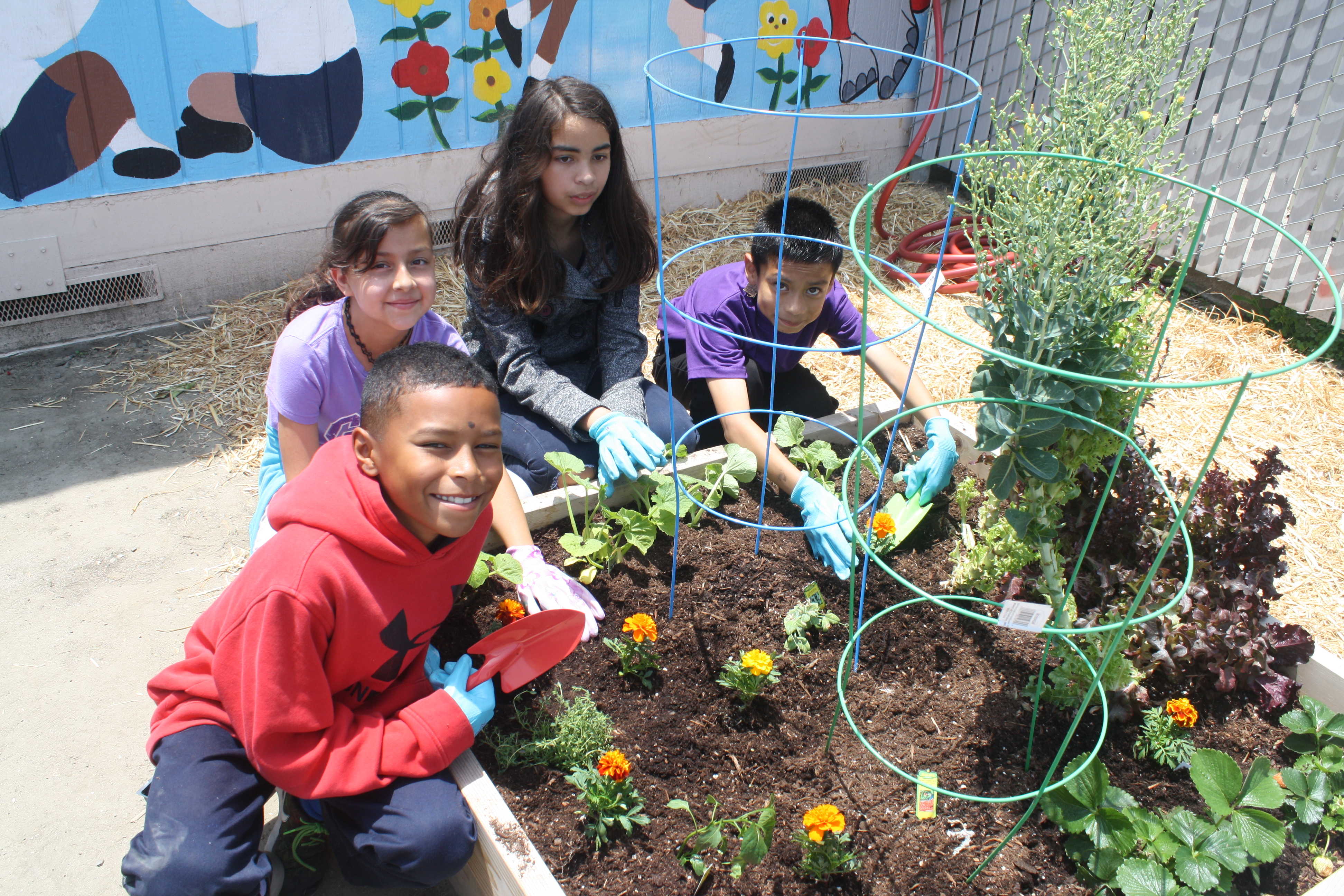 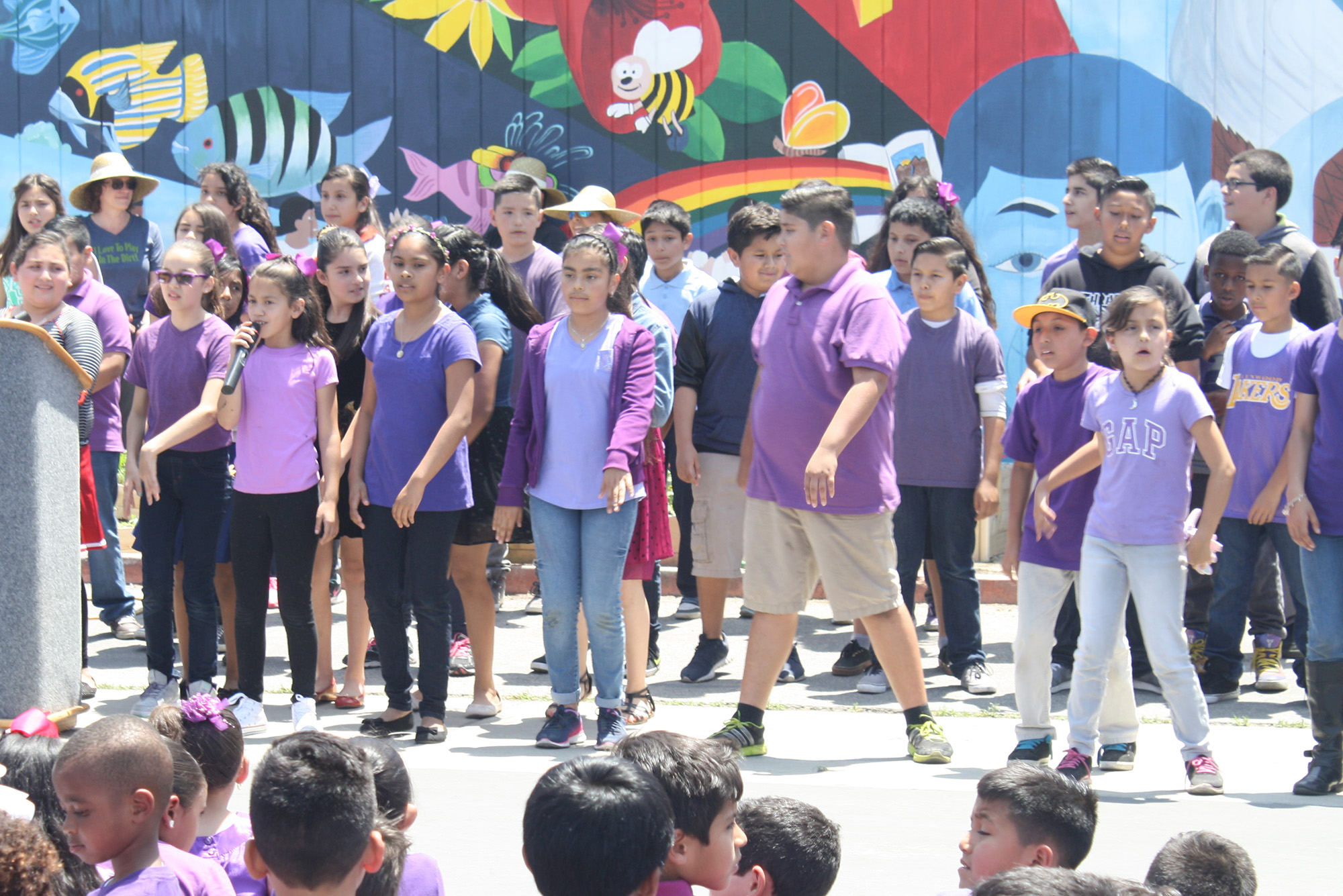