LAKEWOOD – Bellflower Unified School District siblings Beman and Patricia Rezkalla went all out for the 2014 National Red Ribbon Week Photo Contest, decorating not only the door of their family’s home with the event’s theme, but themselves as well.

The siblings, a third-grader and kindergartener at Bellflower Unified School District’s Intensive Learning Center in Lakewood, beat out hundreds of contestants to take one of 10 national prizes awarded to families.

The students were recognized for their victory Jan. 12 during a school-wide assembly.

It is the first win for Bellflower Unified and Los Angeles County in the photo contest, which was launched four years ago as a way of including families in the National Family Partnership’s (NFP) school-focused anti-drug program. Previous California winners hailed from Irvine, Belmont and Fullerton.

Beman and Patricia, who live in Bellflower, created a giant, glittery bow beneath the words “Love Yourself. Be Drug Free.” – Red Ribbon Week’s 2014 theme. Then they posed wearing red shirts with the words “Drug” on Beman and “Free” on Patricia.

Beman said inspiration for the picture came from their mother, who taught music classes in Egypt before the family immigrated to the U.S. in 2014. The children started at Bellflower Unified this fall.

“Love people and love yourself – that’s very good,” Beman said about the slogan, adding that he was completely surprised when his family won the contest.

More than 188,000 people cast votes for the photographs in November. The 10 winning families each received $1,000 for their school and an iPad for themselves.

On Monday, DEA Special Agent Vijay Rathi presented Beman and Patricia with the $1,000 check for their school and encouraged students to advocate against drugs.

“Start thinking about what it really means to keep our communities’ drug free,” Rathi told the more than 600 students gathered for the presentation.

“I couldn’t be more proud of Beman and Patricia,” said Dr. Isel Taylor, principal of the Intensive Learning Center. “They have lived in America for just six months, but have thrown themselves into the full swing of school and community activities.”

Beman and Patricia’s mother, Shereen Elyas, praised the photo contest for opening a dialogue about the issue of drugs in her home and neighborhood.

“My son and daughter are young, they didn’t know about drugs,” she told the Partnership. “But this opened the door for a friendly conversation. … Neighbors asked us about our decorations and we talked to them about it.”

National Red Ribbon Week was created in remembrance of DEA agent Enrique “Kiki” Camarena, who was slain in Mexico in 1985. Held each October, it includes a series of school-based events designed to create an anti-drug culture among the young.

“Students celebrate Red Ribbon Week in over 100,000 schools across the country and overseas,” said NFP President Peggy Sapp. “We designed the contest to bring the Red Ribbon message home and to give parents a chance to talk about the dangers of drug abuse. By receiving the same message at home, in school and in the community, children are significantly more likely to really hear and benefit from the prevention message. We applaud the Rezkalla family for their achievement.”

Jacobs underscored the importance of the partnership’s drug-free message.

“It’s so important that we communicate with our students from a young age about the dangers of drugs and alcohol,” Jacobs said. “This contest was a great way to highlight this issue in a meaningful way even as it provided our students with recognition for the great work they are doing. I want to congratulate Beman, Patricia and their family and thank them for proudly representing the Intensive Learning Center and Bellflower Unified.”

For more information on Red Ribbon Week and the photo contest, go to redribbon.org.

Red Ribbon 1: Bellflower Unified Superintendent Dr. Brian Jacobs shakes hands with Intensive Learning Center kindergartener Patricia Rezkalla as her brother, third-grader Beman, looks on during a ceremony at the Lakewood school on Monday, Jan. 12, 2015. Patricia and Beman were awarded one of 10 national prizes for families in the National Family Partnership’s 2014 Red Ribbon Week National Photo Contest. The victory brought their school $1,000 and the Rezkalla family an iPad.

RedRibbon 2: (L to R) Bellflower Unified Superintendent Dr. Brian Jacobs, DEA Special Agent Vijay Rathi, Intensive Learning Center Principal Dr. Isel Taylor, kindergartener Patricia Rezkalla and third-grader Beman Rezkalla stand with proclamations and a $1,000 check the school received after the siblings won one of 10 national prizes in the National Family Partnership’s 2014 Red Ribbon Week National Photo Contest. The Lakewood school students also won an iPad for their family in the contest. Rathi awarded the school the $1,000 check and the children received their proclamations during a ceremony on Monday, Jan. 12, 2015.family in the contest.

RedRibbon3: Patricia and Beman Rezkalla, students at Bellflower Unified’s Intensive Learning Center in Lakewood, stand with their mother, Shereen Elyas, to display proclamations the family received from U.S. Rep. Linda Sanchez and Assemblyman Anthony Rendon for their victory in the National Family Partnership’s 2014 Red Ribbon Week National Photo Contest. The proclamations were presented to the students, who are in kindergarten and third grade, during a ceremony at the Lakewood school on Monday, Jan. 12, 2015.

RedRibbon4: DEA Special Agent Vijay Rathi stands with Patricia and Beman Rezkalla, students at Bellflower Unified’s Intensive Learning Center in Lakewood on Monday, Jan. 12, 2015, after awarding the school $1,000 the siblings won in the National Family Partnership’s 2014 Red Ribbon Week National Photo Contest. Patricia, a kindergartener, and Beman, a third-grader, hold proclamations they received from U.S. Rep Linda Sanchez and Assemblyman Anthony Rendon. The duo also won an iPad from their family with the award, one of just 10 given out nationwide.

RedRibbon5: DEA Special Agent Vijay Rathi hands Intensive Learning Center third-grader Beman Rezkalla a giant check for $1,000 on Monday, Jan. 12 at the Lakewood school. Beman and his sister Patricia, a kindergartener, won the money for their school when they took home one of 10 national prizes for families in the National Family Partnership’s 2014 Red Ribbon Week Photo Contest. The children also won an iPad for their family. 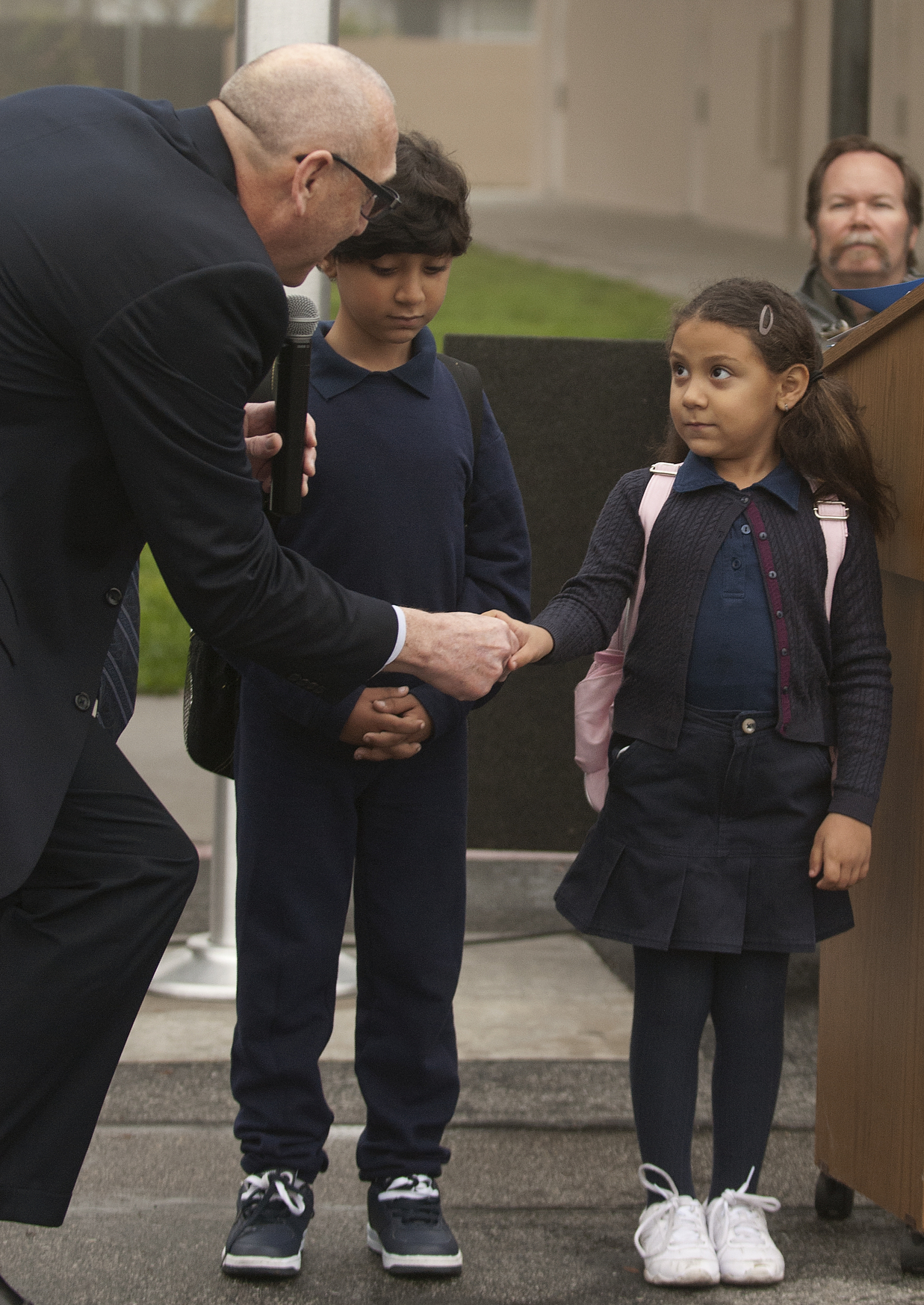 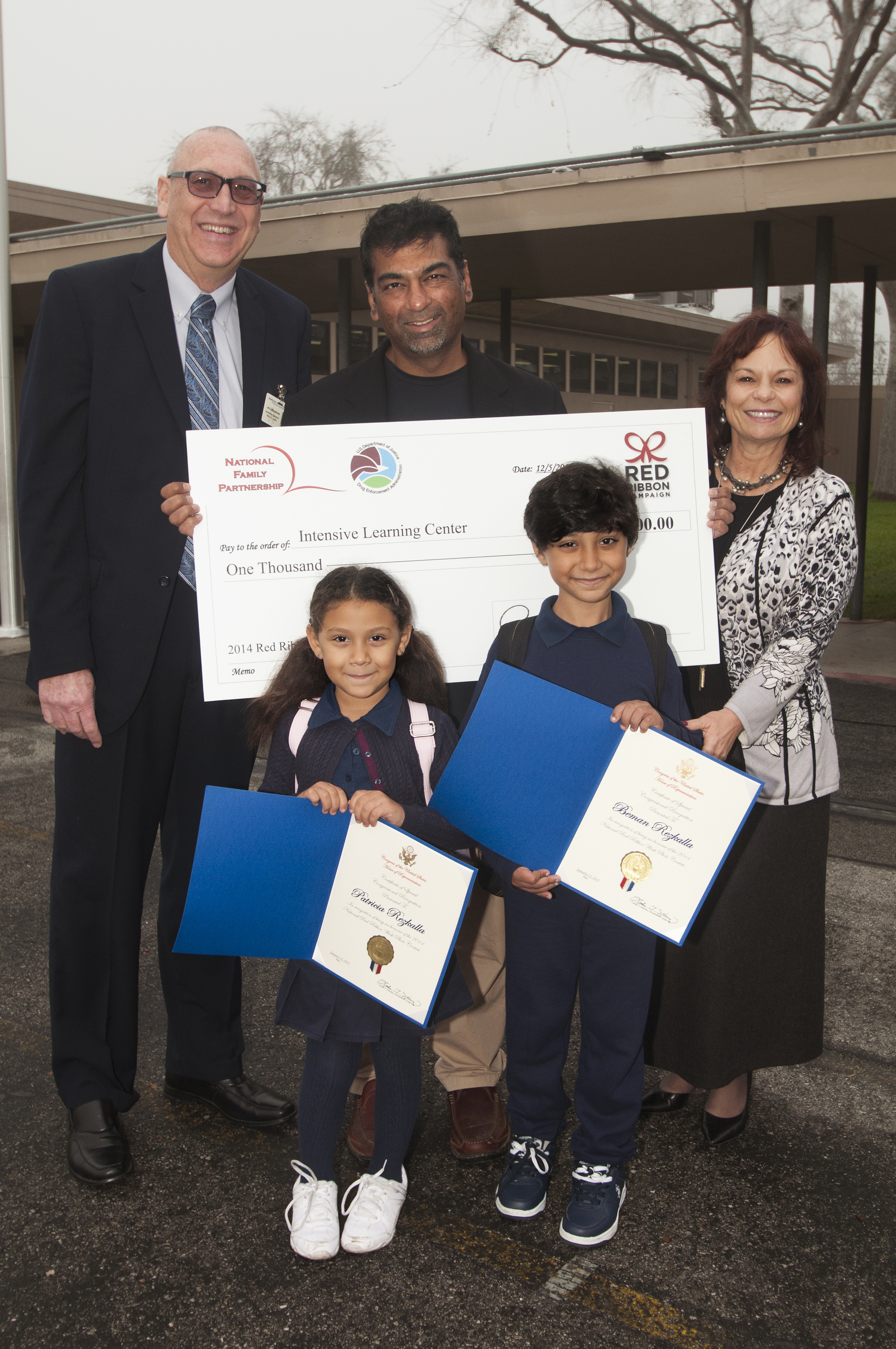 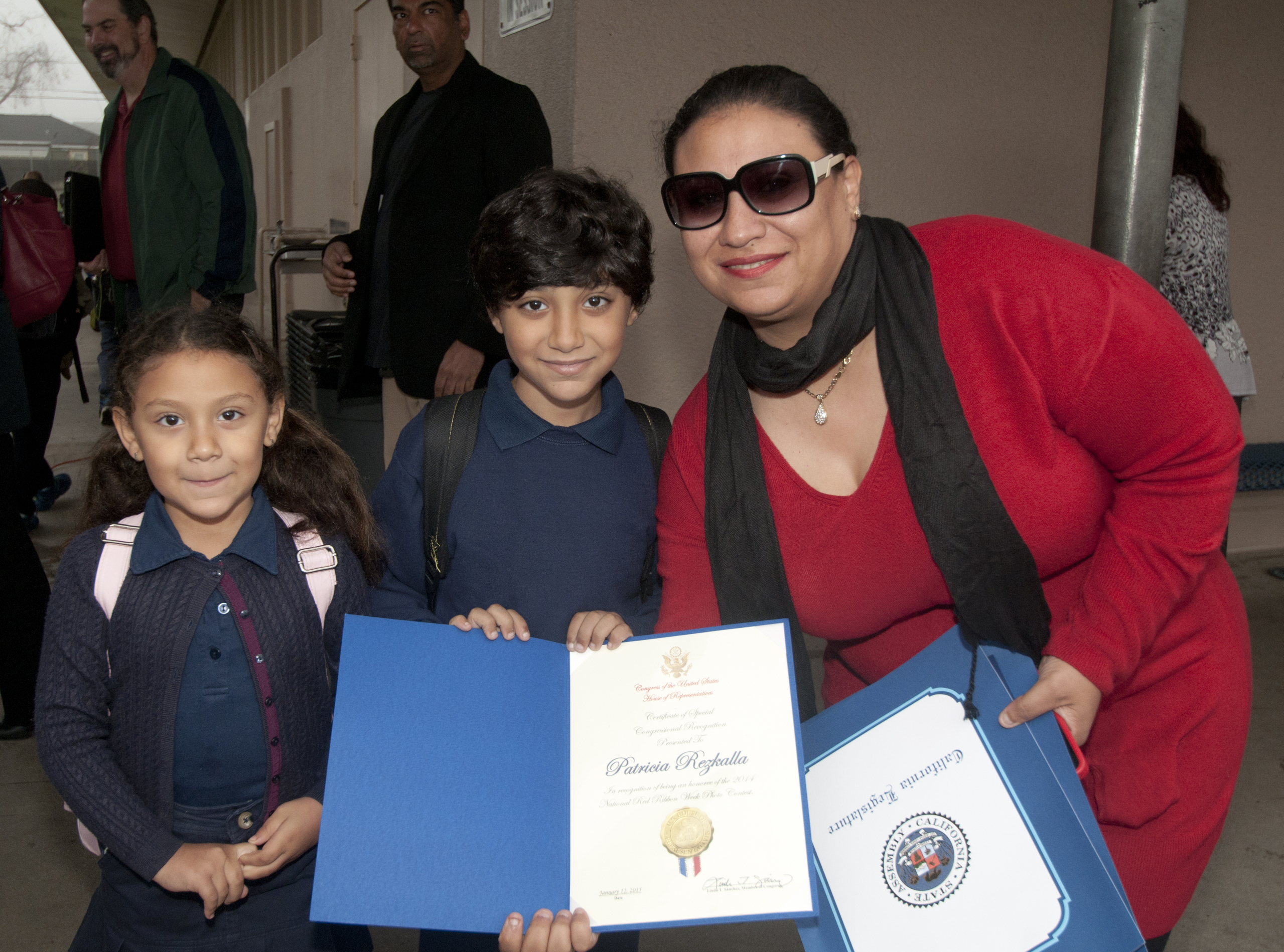 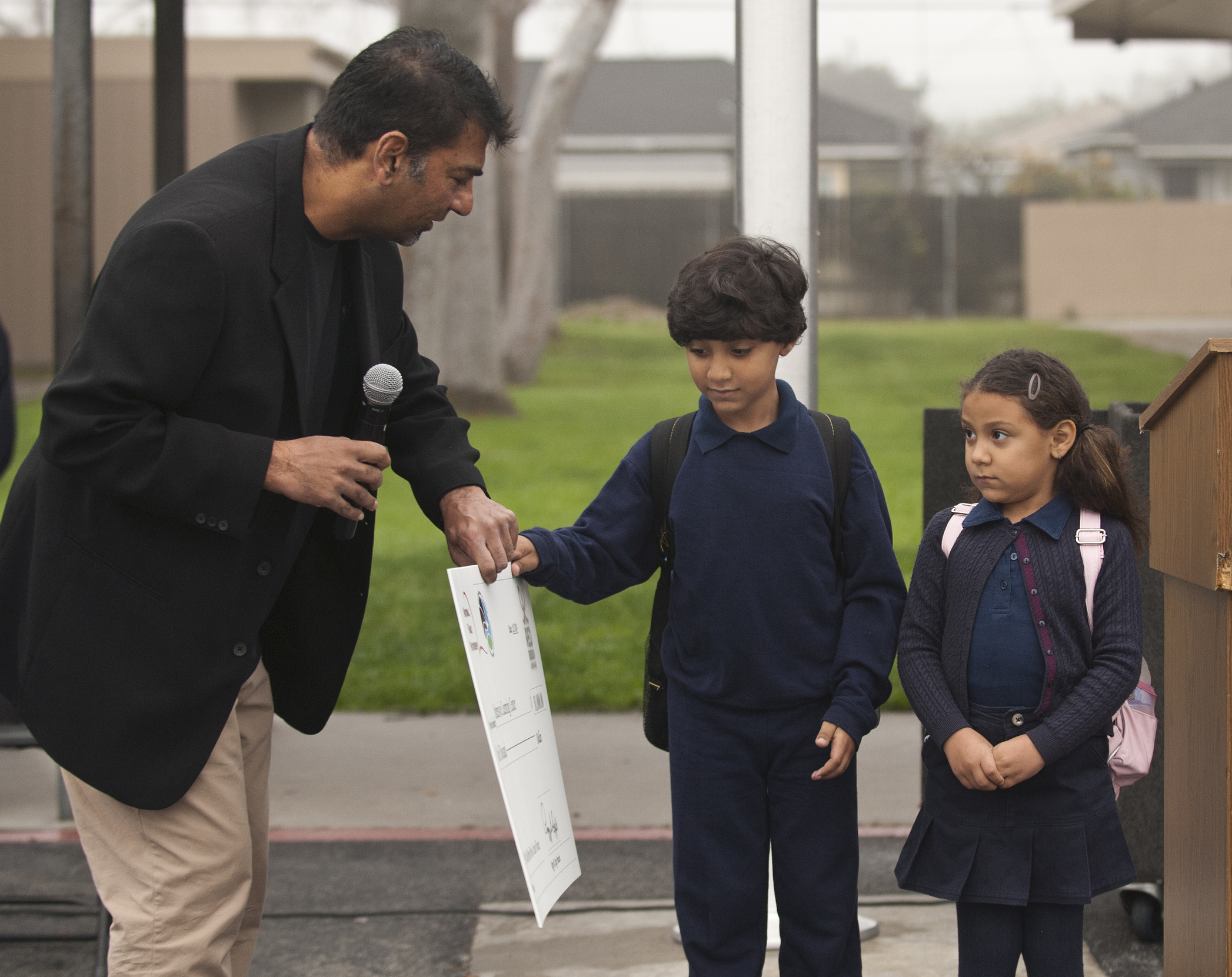 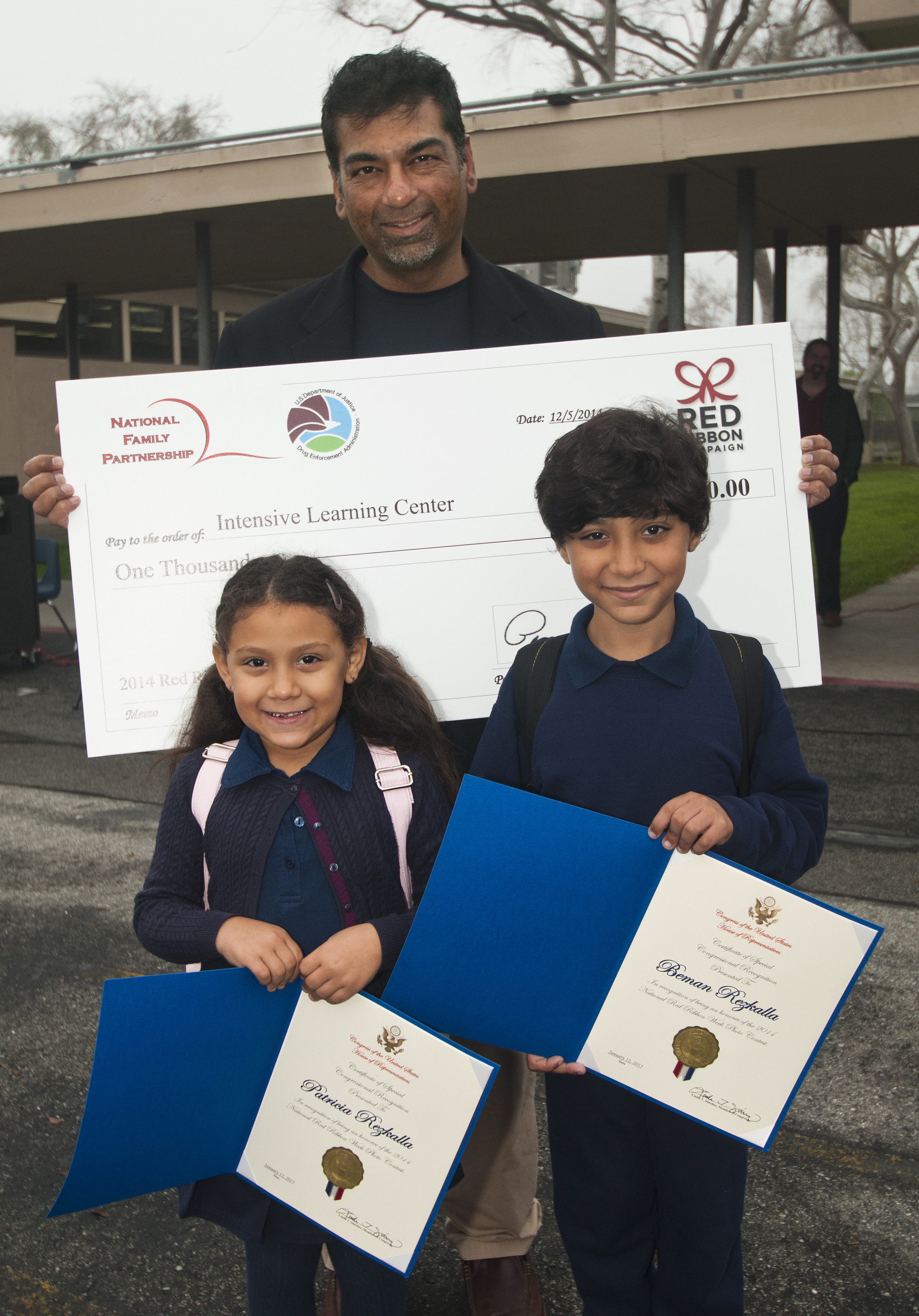