MONTEBELLO – If it wasn’t for Montebello Unified’s California School Age Families (Cal-SAFE) program, Shantell Gomez may not be leading a campus club on health occupations, interning two days a week at Beverly Hospital or traveling to Washington D.C. to advocate for reproductive health. After nearly flunking out of school, Gomez, a Bell Gardens High School (BGHS) senior and mother of a toddler, is now on track to graduate from BGHS in June with a 3.5 grade point average, and recently received a sizable scholarship to attend Mt. St. Mary’s College in Los Angeles.

“We are so proud of Shantell and her accomplishments despite the adversity she has had to overcome,” said Montebello Unified Board President Edgar Cisneros. “Through her own fierce determination and with the help and resources of the Cal-SAFE program at Montebello Unified, Shantell has transformed her life, and that of her young son, to become an inspiration for her peers and community.”

Juggling the responsibilities of school while raising her now 2-year-old son Aidan has been a life-altering struggle for Gomez, who was on the verge of flunking out of school just a few years ago when she found herself pregnant at 15 years old.

Yet, with the support of MUSD’s Cal-SAFE resources and local partner Generation Her – an organization that provides life skills services for MUSD’s Cal-SAFE program – coupled with the attention given by Pregnant Minor Instructor Jennifer Gonzalez and other dedicated MUSD staff, Gomez got her grades up, found her academic passion in health and got into college. She also secured a $60,000 scholarship to college, and the title of “2014 Teen Mom of the Year” from Generation Her.

“Shantell is not like any other teen mom I’ve ever met. She is extremely self-driven,” said Gonzalez, now in her third year of working as a Pregnant Minor Instructor at Montebello Unified. “Shantell is committed to bettering herself and Aidan. She just wants to achieve.”

All of this would have been difficult for Gomez to envision years ago. After giving birth to her son, Shantell battled an unstable home life and struggled in finding the focus and support she needed to raise her son and regain her footing in school. Gonzalez was there to support her every step of the way.

Gonzalez, like many other teachers and administrators at Montebello Unified, provided support to Gomez. They continue to the same for students who need nurturing and guidance when life takes an unexpected twist. Gonzalez, with the resources of MUSD, Cal-SAFE and Generation Her, helps MUSD students cope with the unanticipated development of becoming a teenage mother, while ensuring MUSD teen moms are still able to earn their high school diploma.

“Shantell rises above,” said Dianna Smiley, founder of Generation Her. “We work with more than 400 students and her passion stands out. When Shantell walks in the room she commands attention.”

However, all of this attention comes as a bit of a surprise to Gomez, who modestly downplays her achievements and activism, preferring to concentrate on her studies and make sure she doesn’t completely miss out on being a teenager while she still can.

“It makes me happy to inspire so many people,” said Gomez, who has been asked by Generation Her to speak at its Fifth Anniversary Benefit Fundraiser on Sunday, March 15 in Los Angeles.

After graduation, Gomez hopes to do a little traveling this summer and looks forward to going to Mt. St. Mary’s, where she wants to graduate with a bachelor’s degree in nursing.

“We could not be more proud of Shantell, who has truly evolved from a struggling student into an honors scholar, activist, role model and award-winner,” said Superintendent of Education Susanna Contreras Smith. “To watch her overcome adversity while finding the strength to follow her dreams and advocate for what she believes in represents the core values we wish for every student in our District – she is a shining example of achievement.”

Photo Caption
Gomez: Shantell Gomez — a Bell Gardens High School senior and mother of Aidan, a toddler — is on track to graduate from BGHS in June with a 3.5 grade point average and a $60,000 scholarship to Mt. St. Mary’s College in Los Angeles after struggling with teenage pregnancy at age 15. 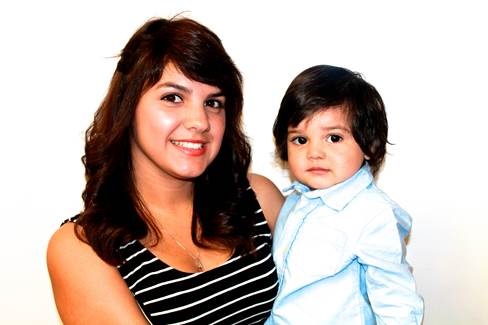