But during his freshman year, Bryant was automatically placed in intervention classes and paired with a peer mentor during the school’s inaugural year of the Academic Mentor program, which provides support to at-risk students.

With his mentor’s persistence and motivation, Bryant finished ninth-grade with two As, three Bs and a C. He entered his senior year not only on track to graduate and completing the courses necessary for college entrance, known as the A-G requirements, but he also became an Academic Mentor.

“I was not the model student, but the Academic Mentor program inspired me to turn my life around,” said Bryant, the senior class president who plans to attend college and major in business administration. “It has been a rewarding experience to help others and be a better student in the process.”

The Academic Mentor program began as a strategic intervention initiative in the 2011-12 school year, growing out of the school’s successful Senator/Link Crew program, which focuses on building school spirit, promoting engagement and helping freshmen adjust to high school.

Under the leadership of Intervention Coordinator Martha Arrona, the Academic Mentor program includes 198 peer mentors – representing nearly a fifth of the junior and senior classes – who serve in 65 classes on campus, including guided studies and math, tutor English language learners and support sophomores in science.

“The Academic Mentor program is empowering for the mentors and mentees and provides significant benefits to developing their own academic success, continual learning and collaborative skills that helps them in high school and beyond,” Arrona said.

By identifying the program as a priority in the District’s Local Control and Accountability Plan (LCAP), Whittier High has been able to support extensive summer professional development for teachers and students who provide small-group and individual learning, teaching and support. LCAP funding also pays for mentors at Saturday school and its after-school intervention program.

“Whittier High’s data drives home the importance of our groundbreaking program in helping to keep our most at-risk freshman on track to graduate,” Principal Lori Eshilian said. “It’s touching to see students like Bryant make a turnaround and make a commitment to impacting the lives of other students.”

MENTOR: Senior Class President and Academic Mentor Bryant Perez was awarded a certificate of merit by the Whittier Union High School District Board of Trustees for his academic and personal achievements. He is joined by Whittier High School Principal Lori Eshilian and his parents, Jose and Claudia. 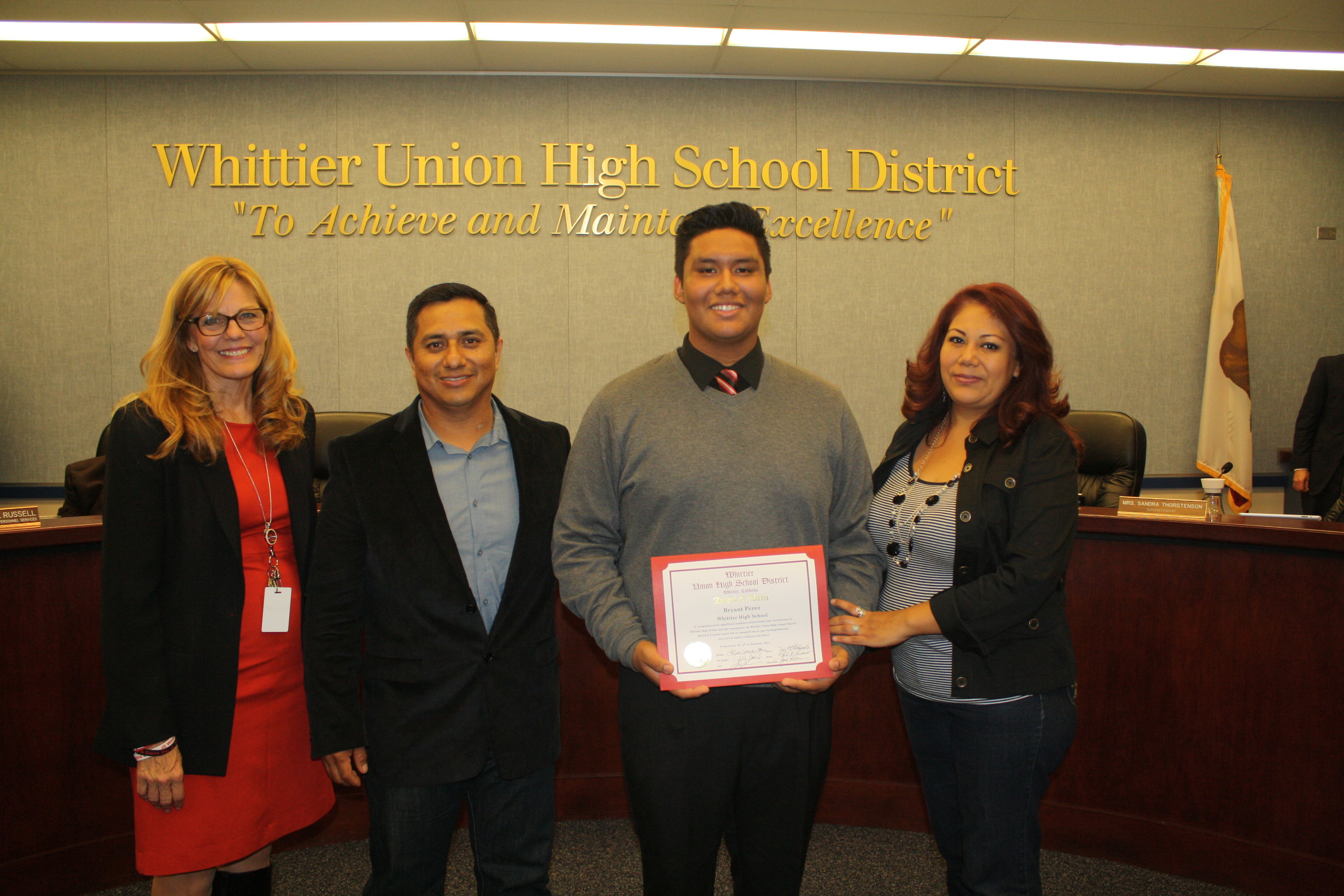