BELLFLOWER – Bellflower Unified in 2015-16 will expand its Mandarin language program to include eighth grade, the third stage of a plan designed to boost students’ ability to compete effectively in the quickly changing international marketplace.

Mandarin is the world’s most prevalent language, spoken by more than 1 billion people, or roughly a fifth of the world’s population. It is also one of the toughest to learn. China, one of America’s largest trading partners, possesses the world’s second-largest economy.

“Providing students with the opportunity to study Mandarin helps take our language program to the next level and represents a deepening of our curriculum that parents have encouraged during our outreach programs,” said Superintendent Dr. Brian Jacobs. “It’s also a critical step in ensuring the greatest range of opportunities for our students as they pursue their education and career paths.”

District leaders introduced the program in 2013-14 as an enrichment option for students in home study and afterschool programs to determine interest and to get students excited about studying Mandarin in seventh grade.
The effort paid off, with dozens of students signing up for the seventh-grade program offered for the first time this year; meanwhile, the enrichment classes are finding an eager audience that has swollen to the hundreds for short-term programs that typically include one to two days of weekly instruction over six weeks.

In 2015-16, the District will add classes in eighth grade – the next step toward development of a high-school program that will eventually qualify for UC and CSU language credit, and prepare students for the Advanced Placement exam in Mandarin.

Bellflower’s Mandarin team – credentialed teacher Cheri Luo and student teacher Susie Kline – say that while their classes are run quite differently, both incorporate a mesh of games, songs, cultural exposure and hands-on activities in their lessons.

Kline’s enrichment classes include students from kindergarten to eighth grade and, typically, meet just one to two days a week for six-week sessions. She’s brought in traditional puppets as tools for communicating ideas about Chinese culture, shared her calligraphy tools and an abacus, and had students write their wishes for the New Year on traditional red posters she used to decorate her classroom.

“You can’t really learn a language without learning about culture. Plus, when you put things in a context, it makes language learning so much more fun,” Kline said. “My goal is to ensure that when they get to middle school, they’ll have some basics and will be that much readier for daily instruction.”

Luo also relies on songs and hands-on activities to connect with students as she teaches them written and verbal Mandarin.

For example, Luo taught students to sing Christmas carols in Mandarin, and then brought them into the community to share what they learned. The skill became a point of pride for students.

Vocabulary is also critical. The Chinese character-alphabet has more than 1,000 symbols, and more are added daily. Luo’s students write high-frequency characters daily and use the images in artistic works. She pushes her students to puzzle out the language’s simpler grammar rules – knowing the process of discovery can help a lesson take firm root.

“The most fun part of this is when you see them come to the realization they know the concept,” Luo said.

MANDARIN1: Students in Bellflower Unified teacher Cheri Luo’s seventh-grade class perform traditional Christmas songs in Mandarin for their school. Students at Mayfair and Bellflower middle schools, who are taking the language for the first time this year, also took their musical show into the community. The middle school program will add classes in eighth grade in 2015-16. 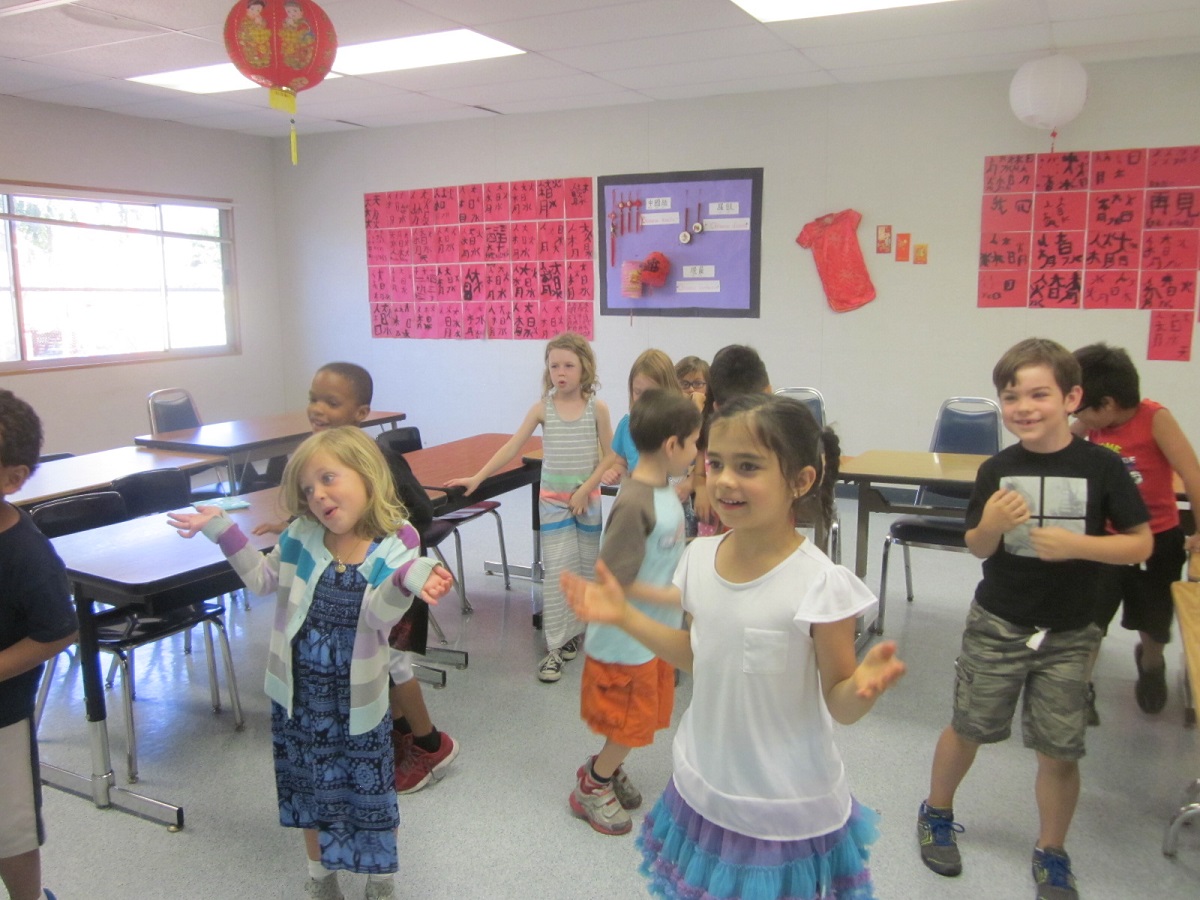 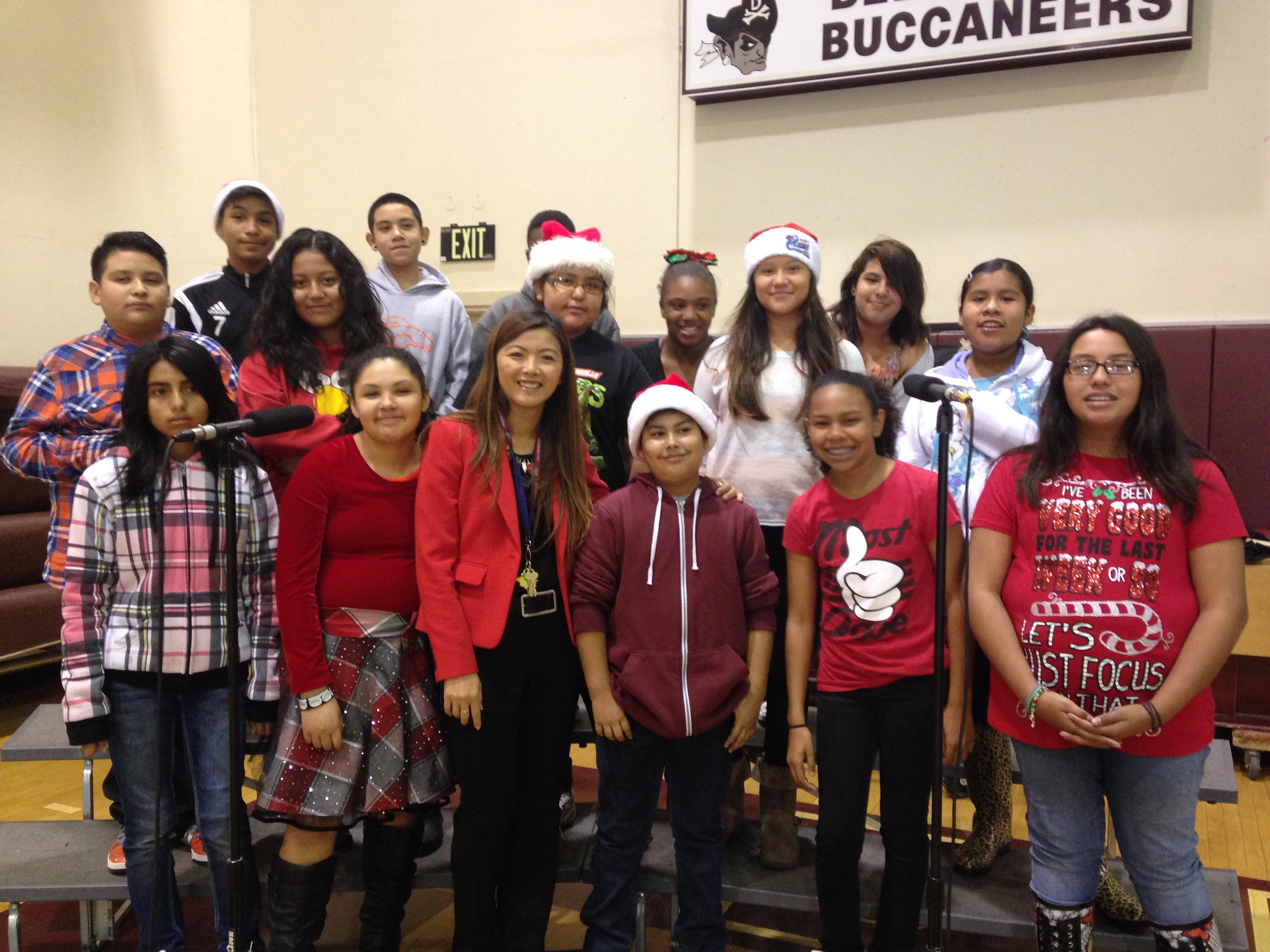