Norwalk High School senior Robert Renteria revealed to classmates how he battled Hodgkin lymphoma throughout his childhood, wracked by debilitating radiation treatments during third grade and for years to defeat the cancer that sapped his body’s ability to fight infections.

It was during this tough time that the Make-A-Wish Foundation granted him a wish: a trip to Disneyworld.

“I didn’t really get to have a childhood,” Renteria, 17, said. “Make-A-Wish made my life feel normal, and it was the happiest day of my life.”

Renteria’s gripping tale persuaded his classmates to choose the Make-A-Wish Foundation as one of 10 charities to receive a $1,000 donation from Norwalk High’s annual Charity for Charities event, now in its fourth year.

As part of the effort, seniors raise money by selling granola bars, research possible charities and lobby their peers before a vote on which charities will receive the donations. This year, nearly 250 seniors teamed up to sell granola bars for one dollar each, raising $10,000 over three weeks.

Renteria’s best friend, Senior Jesse Lotts, asked Renteria to tell his story to show why Make-A-Wish Foundation should be one of the 10 charities this year.

“Make-A-Wish enriches the children’s life experiences for them to continue fighting back,” Lotts, 18, said. “I wouldn’t have been able to meet my best friend without Make-A-Wish.”

“I am so proud of the students who really took the time to understand the charity they chose and found an organization that gave the most back to the community,” NLMUSD Board of Education President Karen Morrison said. “They are strengthening valuable social responsibility traits that they will carry for the rest of their lives.”

Over the last four years, Norwalk High seniors have donated over $45,000 to more than 40 charities. With the exception of guidance from their advisors, students run the Charity for Charities event.

“This has become a really wonderful tradition for our whole school,” Principal Ryan Smith said. “It’s great to see our students give back to the community. I am so proud of our students who took it upon themselves to do this.”

The seniors and staff who nominated this year’s 10 charities are as follows:

“Norwalk High School seniors are an example of the caliber of students who graduate with the compassion and generosity to give back to their communities,” NLMUSD Superintendent Dr. Hasmik Danielian said. “They not only recognize the issues that mean the most to them, but are ready to take action and contribute their time to help others in need.”

NLMUSD_CHARITY1: Norwalk High Senior Robert Renteria (left) told his peers that while he was overcoming Hodgkin’s Lymphoma in the third grade, the Make-A-Wish Foundation provided him a trip to Disneyworld, giving him hope to fight on. His best friend, senior Jesse Lotts (right), nominated Make-A-Wish Foundation as one of 10 charities to receive $1,000 each through the school’s Charity for Charities event, in which nearly 250 seniors raised $10,000 by selling granola bars in three weeks. 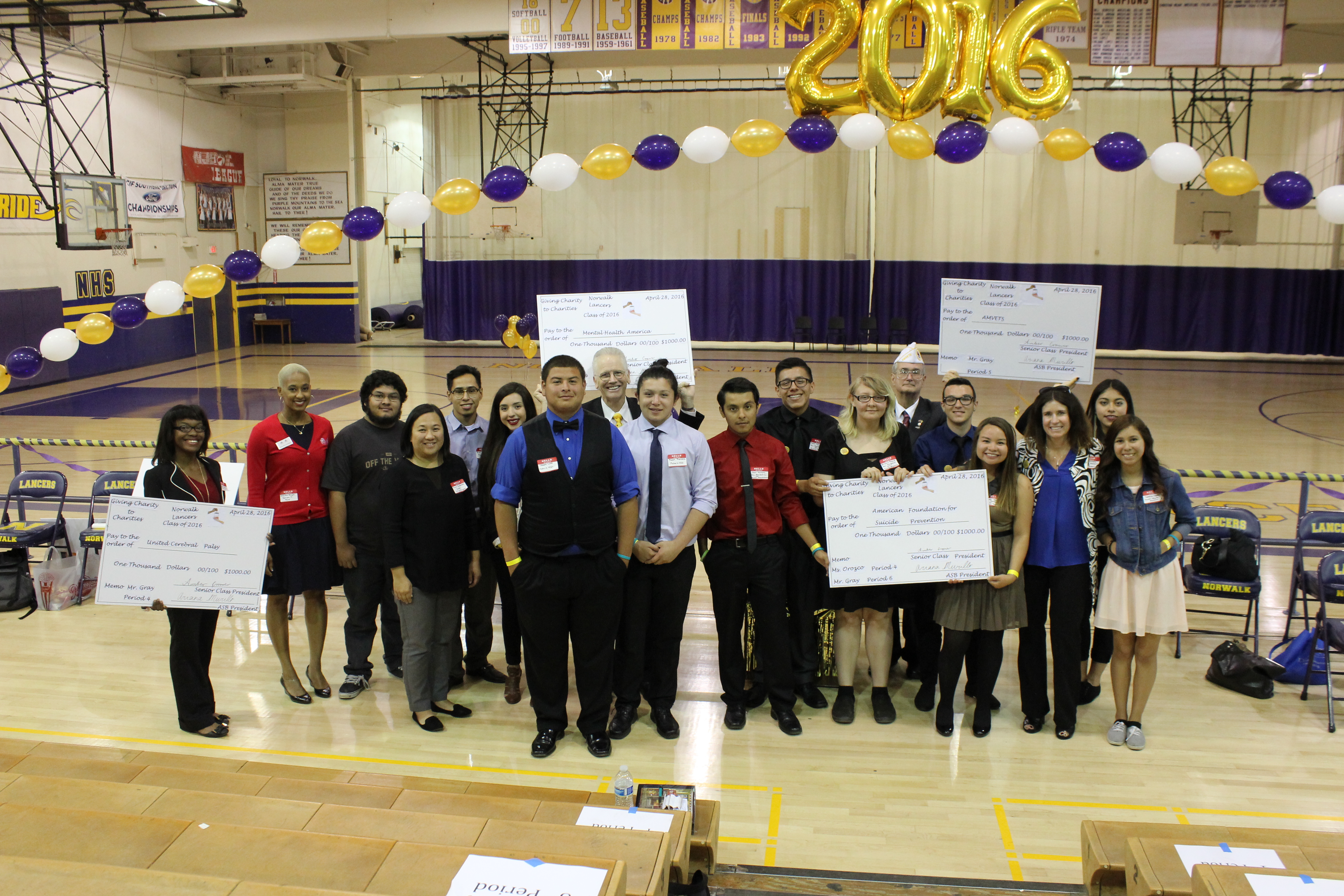